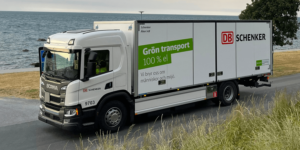 The logistics arm of Deutsche Bahn, DB Schenker, has taken over all deliveries on the Swedish island of Gotland. DB Schenker uses four fully electric Scania P25 distribution trucks and two PHEV trucks from the Swedish manufacturer. The Gotland region has set itself the goal of being fossil-free by 2040.

That is five years ahead of Sweden’s national target. DB’s subsidiary Schenker Åkeri AB now managing all distributional transports on the island – fossil-free with Scania – is but one step. The four electric Scania P25 trucks and the two hybrids Scania PHEV are a part of DB Schenker’s ambition for Gotland to be the world’s top island region in sustainability.

“We already operate with electric vehicles throughout Sweden and know how that works out. Now we take the next step and invest in electrified distribution in a whole region – to really make a difference,” says Viktor Strömblad, Head of Land på DB Schenker. “On top of that, we gain valuable knowledge on electrified operations both in urban areas with many starts and stops, and in rural areas with distances more than 300 kilometres.”

“What DB Schenker does at Gotland, with a fossil-free system solution in a unique environment, teaches us a lot about the challenges and possibilities that occur when a complete distribution centre is electrified. Going forward, we see the same potential for DB Schenker’s international truck fleet,” says Evalena Falck, Scania Sales Director, Strategic Account Management.

DB Schenker has actively decarbonised operations in the Nordics. For example, they were among the first to test an autonomous e-truck from Sweden’s Einride start-up in Jönköping. Since 2020, DB Schenker has also gradually electrified its ‘Oslo City Hub’ distribution centre with e-trucks from Volvo, as reported.

Also, internationally, the Deutsche Bahn subsidiary has been at the forefront of electrification and, in 2018, called for the EU Parliament to increase the CO2 emission limits for trucks.

Scania, which belongs to Traton Group, formerly Volkswagen Truck & Bus, has also increased its commitment to e-mobility. This June, the company announced it would launch new electric models yearly, both for inner-city deliveries and battery-electric trucks for longer routes.

DB Schenker targets electrifying most of its fleet by 2030 and works with numerous manufacturers.