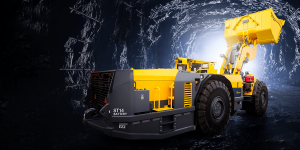 The Swedish industrial group Epiroc has received a major order from Glencore for battery-electric equipment for a nickel and copper mine in Canada. The mine is scheduled to come on stream in 2024.

Glencore’s order for the mine in Ontario includes a total of 23 battery-electric machines, such as vehicles and drilling rigs, as well as automation solutions, including remote control. The vehicles include Scooptram loaders and Minetruck haulers.

Epiroc’s Scooptram ST14, is a 14-tin underground loader and the MT42 mine truck has a payload of 42 tonnes. Batteries for the vehicle and drilling machines are supplied by Northvolt. The fellow-Nordic company has been working with Epiroc for over four years now, since Epiroc decided to electrify its entire range of machinery. During this time, Northvolt has developed a platform for battery systems tailored to Epiroc machines.

As Epiroc points out, electric vehicles and equipment have been getting a lot of custom from mining operators. The advantages are many, apart from the vast reduction of noise in confined spaces, most significantly, electric vehicles reduce emissions, which in turn, lowers operating costs. This is not only because electric vehicles require less maintenance than the fossil-fuelled variety but also because mining companies can lower costs because of the lesser need for ventilation and cooling.

The order from Glencore bodes well for Epiroc. Glencore is arguably one of the largest mining companies in the world and is notably active in the extraction of raw materials feeding the worlds booming electric mobility market. Glencore supplies SK Innovation, Samsung SDI and Tesla with cobalt, for example, as well as China’s GEM and BMW electric vehicles. Glencore is not only covering the extraction of materials for electric vehicles, but also covering the foreseably neccessary recycling of battery materials. Glencore is also engaging in the use of blockchain technology to ensure the ethical sourceing of raw materials.

As in the case of the mine concerned here, nickel and copper are similarly essential elements for battery electric vehicles. The need for alternative nickel mines was increased recently when sanctions against Russia for the invasion of Ukraine put a halt to no less than a quarter of the world’s current nickel supplies.

“Glencore is taking a major leap forward in the mining industry by going all-electric with its Onaping Depth Project,” says Helena Hedblom, Epiroc’s President and CEO. “We are excited to collaborate with Glencore and deliver battery-electric vehicles and automation features on their journey to build a mine of the future.”