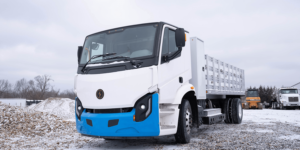 The Canadian government has launched the new Incentives for Medium- and Heavy-Duty Zero-Emission Vehicles (IMHZEV) Program. The $550 million programme will run for four years, starting on July 11 and will provide purchase incentives worth around 50% of the price difference between an electric vehicle and a combustion vehicle.

With the launch of the new IMHZEV program, Transport Canada now is currently involved in the administration of two incentive programs aimed to encourage Canadian citizens and Canadian businesses to switch to emissions-free vehicles. A sum of $1.7 billion has been invested to extend and expand the Incentives for Zero-Emission Vehicles Program (iZEV) for light duty and passenger vehicles until March 2025.

The organizers emphasize that the subsidies will be available to provinces and territories, municipal and local governments, organizations, and businesses, and can spend up to $200,000 per vehicle. Further, the subsidy can be combined with provincial or territorial incentives to make these vehicles even more affordable.

“Helping people and businesses make the switch to electric vehicles is central to our Emissions Reduction Plan. More and more, electric vehicles are becoming the affordable option, and our incentives can help tip the scales for anyone considering making the switch,” said Steven Guilbeault, Minister of Environment and Climate Change, adding: “It is both fair and good policy for businesses to also get purchase incentives for medium- and heavy-duty vehicles, many of which are being produced right here in Canada.”

Canada has recently been stocking up on heavy-duty electric machinery, with two electric mining vehicle orders, one from Sandvik, and one from Glencore, who aim to mine battery resources. The Canadian Post recently announced plans to fully electrify their fleet by 2040, which will likely benefit quite a bit from this measure. Stellantis also has major plans for Canada, with a battery factory announced in May, as well as an investment announcement just weeks prior.