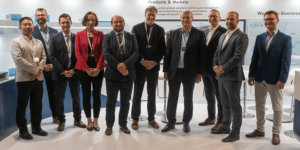 These commercial vehicle batteries will initially be based on CALB’s NMC battery cells. From 2025 onwards, solid-state batteries will also be offered, as BMZ Group writes in a press release. The BMZ Group’s brief statement does not indicate the key data for the battery systems – whether with cells based on liquid or solid electrolyte. The target is batteries for electric buses, electric trucks, agricultural vehicles, construction vehicles and “other LCEVs”.

Accordingly, both parties will jointly explore the global market by sharing their respective resources, it said. “With its R&D and manufacturing expertise, CALB will be a strategic partner for BMZ to maintain its leading role in the commercial vehicle market and beyond,” the German developer of lithium-ion system solutions said.

In February, BMZ Group had introduced TerraE as its global battery brand. The announcement does not mention whether the products from the CALB cooperation will also be sold under the TerraE label.

Samsung SDI is building a second battery plant in Malaysia