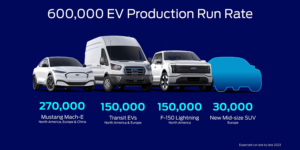 Ford says it has secured all the battery cells it needs with a total capacity of 60 GWh per year to achieve an annual production rate of 600,000 electric cars by the end of 2023. In future, the American company will also use LFP cells from CATL.

To date, Ford has procured about 70 per cent of the battery cells required for the target of two million electric cars in 2026. In addition to NCM cells from its existing partners LG Energy Solution and SK On, Ford will also use LFP cells from CATL in future thanks to a new deal. These will be installed in the Mustang Mach-E for North America from next year and in the F-150 Lightning from the beginning of 2024.

Ford also specified how the 600,000 electric cars per year planned by the end of 2023 will be distributed among the individual models: 270,000 Mustang Mach-Es will be built for the North American, European and Chinese markets, 150,000 F-150 Lightnings for North America, 150,000 Transit EVs for North America and Europe, and 30,000 units of the as yet unnamed electric SUV model for Europe, which will be based on Volkswagen’s Modular E-Drive-Baukasten (MEB) and produced in Cologne from 2023.

It is already known for the first MEB model that the volume is to increase in the following years: Ford has secured components from VW for 600,000 units over a period of six years – in other words, 100,000 vehicles per year in perspective instead of 30,000. Another 600,000 units are to be produced by the second MEB model from Cologne, an electric crossover.

Ford does not mention details of the CATL deal for LFP cells in the press release. It only states that the cell chemistry reduces the dependence on critical raw materials such as nickel and that ten to 15 per cent of material costs can be saved. The specifications of the Mustang Mach-E and F-150 Lightning with LFP batteries and how much the vehicles will cost are not yet known. The agreed delivery volume is also not mentioned.

But: It will be prismatic LFP cells with the cell-to-pack technology of the Chinese company – so there are no more battery modules. At the presentation of the third CtP generation, CATL stated that up to 160 Wh/kg were possible with LFP cells. This generation is to be manufactured from 2023 – so it would fit in with Ford’s plans.

In addition to the current deal, Ford and CATL have signed another memorandum of understanding to explore collaboration for the supply of batteries to Ford markets in China, Europe and North America – outcome open. In addition, Ford plans to localise 40 GWh of LFP cells in North America from 2026 – whether this will be done entirely in-house or with a partner, Ford does not specify.

In the case of the partnerships with LGES and SK On, no details are given about the cells either, except that they are based on NCM chemistry. LGES has doubled its capacity in Wroclaw, and SK On has also scaled “beyond previously planned levels” – at its US plant in Atlanta, but also in Hungary.

“Ford’s new electric vehicle lineup has generated huge enthusiasm and demand, and now we are putting the industrial system in place to scale quickly,” said Jim Farley, Ford president and CEO and president of Ford Model e. “Our Model e team has moved with speed, focus and creativity to secure the battery capacity and raw materials we need to deliver breakthrough EVs for millions of customers.”