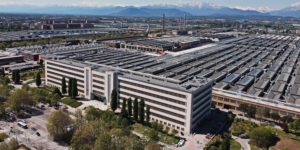 Stellantis has announced investments in the Mirafiori plant in Turin to produce, among other things, gearboxes for electrified vehicles in the future. The plant will complement the existing transmission production in France.

Stellantis and its joint venture partner Punch Powertrain will assemble dual-clutch transmissions (eDCT) for hybrid and plug-in hybrid vehicles in Mirafiori from the second half of 2024, according to the car company. The eDCT is available with two levels of electrification at 48 volts and 320 volts. The transmission is already built in France at PSA’s former Metz plant, and production there is expected to scale up to 600,000 units per year by 2024.

Stellantis does not specify exactly what production capacities are planned in Mirafiori. The announcement only states that the plants in Mirafiori and Metz “at full production” will together supply all relevant Stellantis production sites in Europe.

In 2023, Stellantis also plans to open a centre for circular economy in Mirafiori. Initially, three activities are planned, named vehicle overhaul, vehicle disassembly and parts remanufacturing. It is not clear from the press release whether the projects will also include e-drives and batteries.

The car company also confirms that the Stellantis plant in Melfi, Italy, together with the plant in Sochaux, France, will house the new STLA Medium electric platform in future. Further details are not yet officially disclosed. According to an earlier report, four electric vehicle models based on the STLA Medium will be built in Melfi from 2024. Stellantis also confirmed plans in March to build a third Automotive Cells Company (ACC) battery factory in Termoli, Italy.

“Today’s announcements highlight both our commitment to Italy and our ability to take responsible decisions to anticipate the upcoming global change in our industry, as we push to achieve our Dare Forward 2030 targets,” said Carlos Tavares, CEO of Stellantis. “I am very thankful to everyone involved in finalizing and executing these plans on our charge to becoming a sustainable mobility tech company with the bold objective to become carbon net zero ahead of competition.”