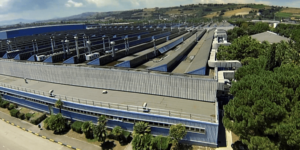 By 2030, the joint venture of Stellantis, Total and, since September 2021, Mercedes-Benz, aim for total battery cell capacities of at least 120 GWh. The Termoli plant will have a capacity of 40 GWh in this, while two other ACC plants in Douvrin (France) and Kaiserslautern (Germany) are planned to be upgraded from their initial 24 GWh each to 40 GWh each to complete the bill.

The move to turn the Termoli engine plant into a battery cell factory had been in the offing for a long time. At the “EV Day” last July, Stellantis CEO Carlos Tavares confirmed that the group had concluded a corresponding agreement on the future of Termoli with the Italian government.

“We are grateful to everyone involved in this investment to secure the future of the great community in Termoli,” Tavares now says, according to the latest news release. “Transforming the existing plant to help support a more sustainable future positions ACC as the European leader in battery manufacturing and reaffirms, thanks to the collaboration with the Ministry of Economic Development, Italy’s role in supporting Stellantis’ transformation to a sustainable mobility tech company.”

What is clear, however, is that the entry of Mercedes-Benz is now signed and sealed, and in this case, the regulatory approvals have been granted. The “agreement to include Mercedes-Benz as a new equal partner with TotalEnergies/Saft and Stellantis” has been concluded, according to the statement.

Details on the timetable for Automotive Cells Company’s (ACC) third battery factory in Termoli, Italy, have emerged following a union representative meeting with Stellantis. The conversion of Stellantis’ current engine plant in Termoli into a battery factory will begin in 2024, with production to start by 2026. ACC expects the battery factory to reach total capacity in 2030 with around 2,000 employees.

However, the schedule will also significantly impact employment at the site. Since Stellantis will phase out engine production in large parts in 2024, but battery production is not to start on a smaller scale until 2026, the union expects layoffs. According to Reuters, up to 1,000 employees will lose their job at the peak before 2,000 workers are expected to return to the plant in 2030. According to union sources, some “premium” internal combustion engines will still be built until 2026 – but with the start of battery production, that will also be the end of the line there, so that the areas can also be converted as a result.

Gianluca Ficco of UILM told Reuters that Stellantis had assured unions that all Termoli workers would be employed at the new Gigafactory. “This is good, but not enough, clearly we want a formal and binding commitment by ACC,” he said. “Then we’ll have to sort out how to manage temporary layoffs.” In addition to retraining, employees will be offered to work at the battery plant in Douvrin, France, for up to six months.

A Stellantis spokesman confirmed to the news agency that unions had been given an update on development plans for Termoli but did not comment on the detailed information.