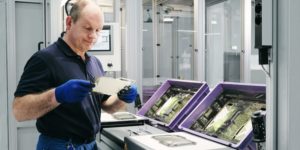 EKPO Fuel Cell Technologies, the fuel cell joint venture between ElringKlinger and Plastic Omnium, has received an order for the new development of a bipolar plate for an unnamed “leading European automobile manufacturer”.

As EKPO will develop and supply prototypes to the manufacturer for planned use in a fuel cell vehicle. The bipolar plates are the heart of an FC stack and are largely responsible for its efficiency. The new development is intended for use in the customer’s future stack generations, according to the statement. The development goal is the highest possible power density with a compact design. It was precisely on the basis of these criteria that EKPO won the contract against competitors.

Specifically, the design is to be a metallic PEMFC bipolar plate. According to EKPO, this design offers “advantages in terms of cost efficiency, power density, which is particularly important for mobile applications, and cold-start capability of fuel cells.”

As is customary for suppliers in such announcements, EKPO does not name names. However, the wording of a “leading European automaker” severely limits the choice, because not many European automakers are currently pursuing fuel cell projects. Opel is responsible for FC development in the Stellantis Group, but has so far used them only in vans. The Renault joint venture Hyvia is also building FC vans, but is relying on Plug Power technology. That leaves BMW, who is the only German OEM pursuing plans for fuel cell passenger cars, and began small-scale production of FC systems for the iX5 Hydrogen at the end of August, albeit still with fuel cells from Toyota.

EKPO emphasizes that the “several years of trusting cooperation with the customer” was also a decisive factor in winning the development contract. This, in turn, speaks in favour of BMW, as both ElringKlinger and BMW have participated jointly in fuel cell research projects in the past.

“This contract from a well-known European car manufacturer is a testimony to EKPO’s first-class competence in fuel cell technology, as a supplier of stacks and individual components,” says Julien Etienne, Chief Commercial Officer at EKPO. “Combining high performance and compact design, our product portfolio is a truly compelling proposition. In addition, customers trust EKPO’s demonstrable industrialization skills and our ability to deliver stacks and components in automotive quality standard and high-volume quantities.”

GM invests in and cooperates with Lithion Recycling