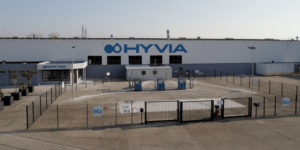 Nine months after it was founded, Hyvia, the joint venture between Renault and fuel cell specialist Plug Power, has opened a plant at Renault’s Refactory in Flins, France. Hyvia plans to assemble and test fuel cell modules based on Plug Power’s technology at the new facility.

The 30-kW fuel cell will power the Renault Master H2-TECH panel van, platform chassis and city bus. In addition to the fuel cell and H2 tanks (between three and seven kilograms of hydrogen, depending on the model), the vehicles also have a 33 kWh battery. Depending on the model, this should add between 150 and 400 kilometres with hydrogen to the approximately 100 battery-electric kilometres.

Actually, the start of FC assembly in Flins and also the premiere of the three vehicles was planned for the end of 2021. Official reasons for the delay are not given. With the start of production in Flins, 15 people will be employed there.

By the end of 2022, the fuel cell assembly and test lines are expected to have a capacity of 1,000 fuel cells per year, and the plant will also begin assembling H2 fueling stations and producing hydrogen with a first electrolyzer. The electrolyzer comes in at one megawatt and is expected to be able to produce up to 450 kil0grams of hydrogen per day to test the fuel cells on site and supply the company’s own H2 fueling station – as the forklifts on site are also powered by hydrogen.

Hyvia also reiterates in the release its goal of covering 30 per cent of the European market for H2 LCVs by 2030 – mind you, 30 per cent of all light-duty vehicles powered by hydrogen, not all light-duty vehicles or E-LCVs. “The Hyvia plant is part of the Re-energy pilar of our strategic Refactory plant in Flins,” says Renault CEO Luca de Meo. “Its ramp up embodies Renault Group’s strong ambitions in H2 mobility, complementary to electric mobility. It will contribute to increase local integration, creating value in France and Europe.”

“Plug Power is proud to see the assembly of its fuel cell here in France,” added Plug Power CEO Andy Marsh. “We have been present in Europe for more than 10 years, being a major investor in the development of the European H2 sector. We have accelerated our growth with HYVIA, in partnership with Renault Group. Together, we’re taking meaningful steps to tackle climate change.”

Renault and Plug Power first announced the joint H2 offensive in light commercial vehicles in January 2021, before then establishing the Hyvia joint venture in the summer.