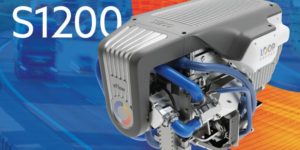 The S1200 builds on Loop Energy’s existing technology and achieves an additional 20 per cent efficiency gain in power generation, according to the company. As a result, the vehicle consumes less hydrogen and operating costs are reduced. Loop Energy calculates in its announcement that parity with fuel costs compared to diesel will thus be possible up to eight years earlier than before. Therefore, according to the announcement, the new system will represent a “significant achievement in the advancement of the global hydrogen industry and the transition of the commercial transportation industry.”

The S1200 is designed for net system efficiency of up to 60 per cent. In addition, Loop Energy states that its development focus on medium- to heavy-duty commercial vehicles “represents an increase in performance range and application scope compared to its other fuel cell products.” A particularly wide “cruise mode window” is expected to contribute to this, meaning the fuel cell is expected to operate efficiently over a wide range of performance requirements for different routes and driving conditions, rather than just a small window.

FC systems suitable for commercial vehicles with 100 to 120 kW power are now not uncommon: Solaris uses a 100 kW fuel cell from Ballard in its Urbino 18 hydrogen, and Quantron showed a fuel cell semitrailer tractor with two 120 kW fuel cells (also from Ballard) at the IAA. Based on the data published so far, however, no real comparison with LoopEnergy’s S1200 is possible.

“With the launch of our new fuel cell system, we are proud to be leading the way in making transport electrification economically viable,” said Ben Nyland, president and CEO of Loop Energy. “We are keen to work with OEMs, governments and the wider hydrogen industry to help meet zero-emission targets.”

The Canadian company is also looking to expand its presence in Europe with its presence at the Hannover show. Loop Energy already has operations in Italy and the United Kingdom and works with several OEMs. Loop Energy is also active in Asia with its new production facility in Shanghai.

Sunwoda to build another 50 GWh battary factory in China