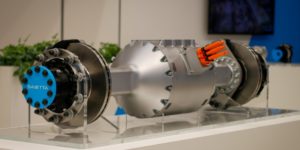 At the IAA Transportation, the British electric drive specialist Saietta presented for the first time a fully integrated electric axle drive for light commercial vehicles up to two tonnes gross vehicle weight. It was not the only electric drive innovation on the British stand.

According to the company’s statement, the electric axle drive for light commercial vehicles integrates “in a single compact unit” Saietta’s proven axial flux motor (AFT), power electronics developed in-house, a modular transmission and a customised axle architecture. This is intended to be a “plug-and-play solution that vehicle manufacturers can quickly integrate into both existing and newly developed light commercial vehicle platforms, Saietta says. At the fair, a first prototype of the Dutch company Duracar was already presented with the E-axle, which is intended for last-mile transport.

The electric drive system in the axle is a model from Saietta’s AFT140 product range. The exact data are not mentioned in the press release, but the AFT series is an axial flux motor (AFT stands for Axial Flux Traction).

A central motor concept and an eAxle concept from Saietta for heavy-duty commercial vehicles also celebrated their world premiere, as did an in-wheel motor solution for delivery vehicles, refuse collection vehicles and autonomous passenger transporters. Both concepts are also modular to be tailored to OEM-specific requirements. According to the British company, the central motor concept promises a more compact design than comparable systems.

Last year Saietta bought the Dutch company e-Traction Europe from the Evergrande New Energy Vehicle Group and this year took over a former ZF plant in Sunderland, England. Incidentally, the central motor concept goes back to the Dutch Saietta unit.

Saietta’s electric drive concepts join the long list of new electric axle drives presented at the IAA Transportation for a wide range of weight classes. Volvo Trucks is focusing its e-axle on long-haul trucks. The new eGen Power 130S from Allison Transmission is designed for a total axle weight of up to 13 tonnes. Cummins, too, is targeting heavy vehicles with a gross vehicle weight of up to 44 tonnes with its new Meritor ePowertrain 17Xe driveline. The German supplier Bosch had announced that a new electric drive system for vans and small and medium-sized trucks will be built in series.

Quantron looks to expand to India