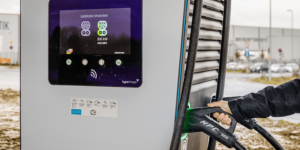 The EU Parliament has adopted binding minimum targets for the expansion of infrastructure for zero tailpipe-emission transport. These stipulate a minimum density of EV charging and hydrogen refuelling stations that must be affordable and easy to use, and a faster rollout of stations. Emissions in the maritime sector are now to be reduced with specific targets.

The new rules are part of the “Fit for 55 in 2030 package”, whereby the EU plans to reduce emissions by at least 55 per cent by 2030 compared to 1990 levels. The Transport Committee of the EU Parliament presented its proposals for an accelerated expansion of the charging and H2 refuelling infrastructure at the beginning of October. These proposals have now been adopted by the EU Parliament in Strasbourg for negotiations with the Member States.

MEPs have now agreed to set binding national minimum targets for the expansion of alternative fuel infrastructure. The Member States must now present a plan by 2024 on how they intend to achieve these targets.

According to the adopted text, there should be at least one charging station for electric cars every 60 kilometres along the EU’s main roads by 2026. The same requirement would apply to trucks and buses, but only on core TEN-T networks and with more powerful stations. There would be exceptions to this required density of stations for Europe’s outermost regions, islands and roads with very low traffic volumes.

MEPs also propose to set up more hydrogen refuelling stations along the EU’s main roads. They should be accessible every 100 kilometres instead of every 150 kilometres as proposed by the Commission. This should be implemented by 2028 instead of 2031 as planned by the Commission. The penalties of 1,000 euros per uninstalled charging point demanded by Ismail Ertug, the SPD parliamentarian in charge, has not been mentioned in the pronouncement of these measures from the EU Parliament.

In addition, Parliament calls for an “EU database on alternative fuels” to be set up by 2027 to make information available on availability, waiting times and prices at various charging and hydrogen refuelling stations throughout Europe. This information should also be displayed at the charging and refuelling stations themselves so that consumers should be able to easily and transparently view and compare prices per kilowatt hour or per kilogram. “Alternative filling stations should be accessible for all vehicle brands and payment should be easy and possible by credit card.”

The maritime industry is now receiving increased focus on reducing emissions and dependencies on fossil fuels. Here, the European Parliament stipulates that greenhouse gas (GHG) emissions from ships should be reduced by 2% as of 2025, 20% as of 2035 and 80% as of 2050 compared to levels in 2020.

This is the first time that concrete targets have been set for the shipping industry in Europe. Until now, the EU has only agreed to include the maritime shipping sector in the EU ETS, which basically consisted of the gradual surrendering of allowances for shipping companies. Control of maritime emissions was first demanded by the EU Parliament in 2020.

Other measures stipulate that container ships and passenger ships are to use on-shore power supply while at berth at main EU ports as of 2030 and are required to utilise two per cent of renewable fuels. These maritime sector targets apply to the largest ships, those above a gross tonnage of 5000. The EU Parliament points out that these ships are responsible for 90 per cent of CO2 emissions from vessels used in or between EU ports.

Despite the lack of penalties mentioned for charging and refuelling infrastructure, it seems that the MEPs consider the maritime sector is in need of a little encouragement, stating: “To ensure compliance, MEPs favour the introduction of penalties.” Revenue generated from these penalties should be put towards the Ocean Fund with the goal of further decarbonising the maritime sector, energy efficiency and zero-emission propulsion technologies.

This is where the EU is tackling a major hurdle in the effort to decarbonise transport – so-called hard-to-abate sectors. This includes the aviation, heavy-duty, long-haul trucking, and shipping industries. While the trucking sector appears to be making leaps and bounds in zero-emission technology, the shipping sector – where vessels are only renewed every 50 years – faces even greater hurdles with longer distances and far heavier loads.

While smaller ships and ferries can be powered by battery electric propulsion systems, which, of course, means zero emissions, fuel cell systems can travel even further with zero emissions due to the higher energy density. But for larger container ships on longer journeys, technology is having to catch up with sufficiently powerful hydrogen fuel cell systems, (green) ammonia systems (made from green hydrogen – as Germany is planning to import from Canada), and hydrogen combustion technology.