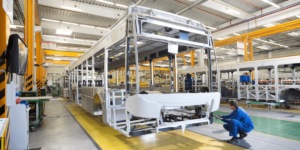 BYD plans to produce electric vehicles and process battery raw materials in Brazil. To this end, the Chinese manufacturer has signed a letter of intent with the government of the state of Bahia to set up three production lines in the city of Camaçari.

BYD has now confirmed this to the portal Automotive Business. According to the report, final details still need to be clarified, but according to the information so far, the construction of the BYD plants in Camaçari is to begin in June 2023. The plan is for the two assembly lines for raw material preparation and for chassis of electric buses and trucks to go into operation in October 2024, followed by the third line for electric and plug-in hybrid cars in January 2025.

BYD plans to be based on a former Ford industrial site in the city, which closed in 2021. According to the Bahia government, the Chinese manufacturer is willing to invest three billion reals (about 600 million euros) in the facilities and create 1,200 direct jobs. However, the deal is not yet in the bag. According to Automotive Business, BYD still has to adjust some points in the letter of intent. Only then will they make an official statement.

According to the report, the raw material processing plant will produce lithium and iron phosphate from Brazilian sources for use in BYD’s batteries. However, it is planned to export them to China. This is said to have been agreed in writing between the contracting parties. In other words, BYD apparently wants to keep the production of the cells and batteries in China. Only official statements will show whether the company is really pursuing this strategy. But it would be consistent: BYD is locating all of its new battery factories in China; internationally, the only talk so far is of a planned battery plant in Europe.

But back to Brazil: the Bahian government is otherwise accommodating BYD with tax incentives, which the state is prepared to promise until 2032. In return, BYD promises to bring employment to the region and is also planning a feasibility study for importing vehicles via the nearby port of Salvador.