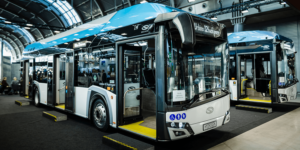 Four hydrogen buses are to be used in Venice and the surrounding area from mid-2023. The transport companies AVM Venezia and ACTV SPA Venezia, which are responsible for public transport in Venice and the municipalities of Venice and Chioggia, have ordered four Urbino 12 hydrogens from Solaris.

The Polish manufacturer has now announced that delivery is scheduled for the end of the second quarter of 2023, i.e. probably in the course of June. The vehicles, which cost a total of 2.5 million euros, are then to be used from Q3.

These are not the first locally emission-free buses in Venice: in 2020, Solaris already delivered 30 battery-electric Urbino 12 electric including charging infrastructure, serving all public transport on the islands of Lido and Pellestrina, which are part of Venice. While the charging infrastructure was included in the delivery of the battery buses, it is not clear from the Solaris communication where the FC buses will be refuelled and where the hydrogen will come from.