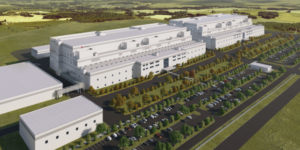 The South Korean battery cell manufacturer LG Chem has announced the construction of the largest factory for the production of cathode materials for electric car batteries on American soil. This will be built in Clarksville in the state of Tennessee with an investment of 3.2 billion US dollars.

According to the company, the plant will have an annual production capacity of 120,000 tonnes by 2027 – enough for 1.2 million electric vehicles, according to LG Chem. Construction is scheduled to begin in the first quarter of 2023, with production starting in the second half of 2025. LG Chem further announces that the factory will produce NCMA cathode materials containing nickel, cobalt, manganese and aluminium for next-generation electric car batteries “with improved capacity and stability”.

The factory itself is being built on 170 hectares of land near Clarksville, is to be powered entirely by renewable energy and create a good 850 jobs. With “state-of-the-art production technology”, LG Chem wants to increase the output per line and year to over 10,000 tonnes of cathode material. The plant builders are taking their cue from LG Chem’s fourth cathode material plant in Cheongju in South Korea, where this concept is already being implemented.

The South Korean company further stated that the decision to locate the plant in Tennessee was made “due to its proximity to important customers, easy transport of raw materials and active cooperation with the state government and local authorities”. Like many recent investors, the group cites “laws such as the Inflation Reduction Act (IRA)” as an incentive to increase its activities in the US right now. In Tennessee, LG is building a battery plant together with joint venture partner GM near GM’s Spring Hill vehicle plant.

LG Chem says the Tennessee site will play a crucial role in quadrupling its battery materials business, including cathode materials, from 5 trillion won in 2022 to 20 trillion won by 2027 (roughly from 3.6 to 14.4 billion euros). LG Chem currently has several factories in South Korea and one in Wuxi, China. The new factory in the USA is to serve as a hub in the future to supply both national and global customers.

One major national customer has already been identified: US manufacturer General Motors signed agreements with LG Chem and Livent in the summer for the supply of battery materials. The binding agreement with LG Chem provides for the supply of cathode active material (CAM). Under the terms of the agreement, LG Chem is to supply GM with more than 950,000 tonnes of CAM from the second half of 2022 until 2030.

The cathode material secured through the contract will be used at the two US battery cell plants of Ultium Cells, the joint venture between GM and LG Energy Solutions, according to a release at the time. It is said to be sufficient for the production of about five million electric vehicles. Back in the summer, it was said that the two companies were discussing setting up a CAM production plant in North America by the end of 2025. It is quite possible that this referred to the now announced factory.

“The new cathode manufacturing facility in Tennessee brings us one step closer to becoming the world’s best battery materials manufacturer and fulfilling our corporate vision to become a top global science company,” expresses LG Chem CEO Shin Hak-Cheol. “This site will be the North American manufacturing center of excellence for the cathode supply chain and lead to the creation of many well-paying jobs, contributing to the local economy in Clarksville.”