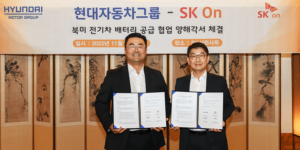 Hyundai Motor Group has signed a memorandum of understanding with SK On to secure the supply of SK batteries for Hyundai Group electric cars in North America from 2025. However, further details of the collaboration will be announced at a later date.

The memorandum of understanding has now been signed in Seoul at SK Group’s headquarters by high-ranking managers. Literally, the statement says: “Under the MOU, both parties will cooperate to supply SK On batteries to the Group’s EV plants in the US after 2025.”

The expanded cooperation between the two companies had already been foreshadowed a few days ago: After Hyundai Motor Group began construction of its new electric car plant in the US state of Georgia at the end of October, the company is planning up to three new battery factories there with a total capacity of 90 gigawatt-hours per year, according to media reports, together with partners SK On and LG Energy Solution. However, this has not yet been officially confirmed.

The timing now set out in the memorandum of understanding would also fit in with this: Hyundai’s ‘Megaplant’ in Georgia is to go into operation in 2025. The company has not yet confirmed which vehicles will be built there. According to reports, it will be the large electric SUV Hyundai Ioniq 7 and Kia EV9, which are aimed at the North American market. Both models were based on Hyundai’s own E-GMP electric platform.

Batteries from SK On are already installed in the Hyundai Ioniq 5 and Ioniq 6 as well as the Kia EV6, all three of which also use the E-GMP. It is not known whether the US plans will simply involve local production of the familiar SK cells or a new cell chemistry. The companies have only signed a memorandum of understanding – but a binding agreement is likely to follow soon, if only because of the planned commissioning in 2025.

A new battery plant in Georgia would make sense not only for Hyundai, but also for the SK Group. SK On already operates its first own US battery factory in the state and supplies Volkswagen and Ford from there.

“We expect the cooperation between SK On and Hyundai Motor Group to create a big synergy,” said Choi Young-chan, chief administrative officer of SK On. “With the latest MOU, both sides can hold a solid position in the process of electrification in the North American auto market.” Kim Heung-soo, Executive Vice President of Hyundai Motor, adds: “We expect the stable supply of EV batteries from SK On will enable us to focus on securing EV leadership in the US market.”

Keliber to mine and refine lithium in Finland