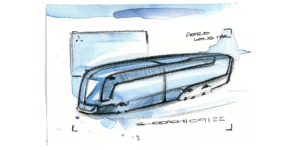 From the end of this decade, Daimler Buses wants to offer fully electrically powered coaches with its Mercedes-Benz and Setra brands. To accelerate the development, Daimler Buses has joined forces with research institutes and practitioners from the industry to form the Electrified Coach project called ELCH.

The project is funded by the German government, although Daimler Buses has not disclosed the amount in its announcement. The aim is to develop a modular drive train including two demonstration vehicles over the next four years, which will then be tested under real operating conditions. The findings from the construction of the demonstration vehicles will then form the basis for the “planning of cost-effective production and assembly processes for electrically powered coaches”, according to Daimler Buses.

Even though in many places the communication only refers in general terms to “locally emission-free coaches” or “fully electrically powered coaches” (which would also include the fuel cell in addition to battery-electric drives), the company’s statement nevertheless specifies that a purely battery-electric drive is to be developed as part of the ELCH project.

This is somewhat surprising since the Group CEO Martin Daum announced in spring 2022 that fuel cell is the preferred solution: “Definitely in long-distance coach transport,” since for destinations away from the major traffic arteries, “hydrogen tanks make more sense as energy storage than batteries”.

Now, battery-electric coach drives are at least being investigated as part of the research project. First, in the concept phase, a modular drive system is being tested in a model trial with a view to energy consumption, range, driving performance and battery life. Here, the bus developers also want to consider synergies with components from Daimler Truck’s truck division. Based on the concept evaluation, which will include factors such as overall costs, environmental impact and possible integration into existing operating concepts in addition to the model test, two prototype powertrains will then be developed and integrated into demonstrator vehicles.

Payload and passenger capacity should be the same as diesel counterparts

Daimler notes that offering the same passenger capacity and load capacity for luggage as diesel buses are an important prerequisite for the success of electric coaches. The German automotive giant says that not only the drive itself is to be optimised, but also the aerodynamics and the weight of the vehicles – this is clearly important as batteries are heavy, which is generally why fuel cell alternatives are looked at for long haul transport. For electric city buses, Dutch firm Ebusco has had some success with its 3.0 model with a particularly light body which claims a range of up to 500 kilometres.

On the crucial point of the range of intercity buses, which is the real challenge with long-distance buses, Daimler Buses does not specify concrete development targets or the targeted charging time. Since the Milence truck charging network is supported by Daimler Truck among others and is also expressly intended for coaches, the MCS charging standard is likely to be the standard here.

The final tests of the demonstrator vehicles will play an important role because the acceptance of the technology depends “significantly on its suitability in practice”. The test drives are therefore to be based “on real customer cycles” and form the basis for further development of the powertrains towards series production readiness.

“We are delighted to be the only bus/coach manufacturer able to bring our development expertise to the ELCH project,” says Michael Klein, Head of Product Development and Production Daimler Buses. “As a technological pioneer in the industry, we can deal with the topic both quickly as well as comprehensively and in a practical way.”

Partners in the project coordinated by Daimler Buses are the Karlsruhe Institute of Technology KIT, the University of Mannheim, the Technical University of Kaiserslautern and the operator Flix with its green Flix long-distance buses. FlixBus already launched its first intercity electric bus service in Portugal with Yutong buses in summer 2022. The range of these buses is still fairly unspectacular at 350 kilometres, which is common for city buses, as is the charging time of three hours. FlixBus is also cooperating on fuel cell buses with Freudenberg and ZF in a research project to develop a fuel cell drive system for long-distance buses by 2023.