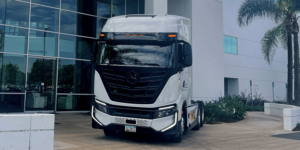 After acquiring battery maker Romeo Power last year, Nikola Motor is now relocating its battery production from Cypress, California, to Nikola’s own plant in Coolidge in the state of Arizona. The move is expected to be completed by mid-2023.

By moving battery manufacturing to its own main plant, Nikola is bringing truck and fuel cell module assembly and battery module and pack production under one roof. The truck maker says that the production of batteries in Cypress will initially continue until the end of the second quarter of 2023, while production equipment in Coolidge is commissioned in parallel, making assurances that a detailed transition plan will be developed to avoid disruption to production.

The move will also be accompanied by the automation of the battery line which Nikola says will improve quality and increase efficiency. “This decision reinforces our commitment to finding ways to optimise our cost structure and create a sustainable business model,” said Michael Lohscheller, who was appointed Nikola Corporation President and CEO in August 2022. “We remain focused on meeting our 2023 milestones, including pack and module production targets.” The deal was initiated under Lohscheller’s predecessor, Mark Russell.

Romeo will keep a development department in Cypress, California, in a separate facility. The team there will focus on developing next-generation battery management system software and modules.

Nikola acquired Romeo Power last year in a deal that was completed by mid-October 2022. The expectation was at the time that the all-stock transaction would lead to annual cost savings of up to $350 million by 2026. Before the takeover, Nikola was Romeo’s largest manufacturing customer.

The year before, in 2021, Romeo Power went public on the US stock market via a merger with investment firm RMG Acquisition. The startup was founded by former engineers from SpaceX, Tesla, Apple, Amazon and Samsung in 2016. Romeo is now a wholly-owned subsidiary of Nikola.

Nikola began volume production of its Tre battery-electric truck at its Coolidge plant in Arizona in late March 2022. In December, Nikola said it would complete a Phase 2 expansion of its Coolidge plant in the first quarter of 2023. At that point, the company would have a production capacity of 20,000 vehicles per year but is, as yet, only producing a small fraction of this capacity.