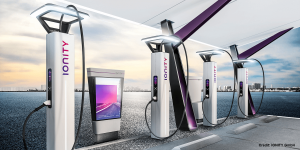 According to the report by Sueddeutsche Zeitung, talks are underway with Volvo, Fiat-Chrysler, PSA/Opel, Jaguar Land Rover as well as Tesla. Other interested parties also include the French energy provider Engie, Enel from Italy and E.On from Germany, as well as multiple insurance companies.

The network is still in its early stages though – from the 400 required construction permits to install the high speed charging network across Europe, IONITY has only managed to accumulate 20 so far. The report cites statements by IONITY CEO Michael Hajesch.

The joint undertaking was recently able to open its first charging station on the A61 near Brohltal in Germany. At the Tank & Rast gas station EVs with CCS capability are allowed to charge for free until the 31.05. Another site opened earlier in Denmark (we reported).

There is also news from IONITYs location partners. Next to Shell, OMW, Tank & Rast and Circle K, Q8 and MRH will be joining soon, and more partners are expected in future.

worth of shares in the financially troubled EV start-up Lordstown Motors are to be bought by a hedge fund managed by Yorkville Advisors over three years.