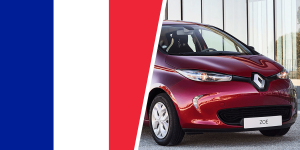 In Europe, France has been making a strong headstart into the electric mobility business. Renault is among the leading French companies involved in EV development on all levels – from hydrogen to autonomous emission-free public transport. The French carmaker will also be headlining at this year’s EVS 32.

Renault has been on board with electric mobility comparitively early on in the game and has recently passed the marker of having sold 200,000 electric vehicles in Europe alone. This covers their entire fully electric palette, with the Zoe leading sales with a market share of 18.2% last year. This is followed by the Kangoo Z.E., and the Master Z.E., with the Twizy sales bringing up the rear.

Renault has also been investing heavily in alternative energy transportation, taking some pressure off Battery Electric Vehicles to carry the market in the near future, and began investing in hybrid systems, of which they presented the newest generation at the recent Geneva Motor Show.

Aside from being a staple provider of vehicles for many environmentally friendly car sharing fleets, as well as running their own car-sharing undertaking in their native Paris, Renault has also set their sights far beyond Europe: Twizy production, for example, is to be moved to South Korea, since 60% of the models manufactured are sold there anyways. This would cut down on a lot of transport emissions, as well as setting the stage for a more globalized production chain, rather than just focusing on individual links within it. The Chinese market has also been lucky enough to receive a few exclusive electrified vehicle models, including an SUV and several hybrids.

French consumers have also been showing increasing interest in the field of electric mobility, as last November showed a 111% increase compared to the previous year in terms of electric car sales. It turns out that the yellow vest movement, which has been calling for a more comprehensive environmental reform of business practices, has actually been holding up this part of the action.

Renault has engaged on electric mobility on other levels than just on the road, however, which will also be further elaborated by Gilles Normand, Director of the Electric Vehicle Division from the Groupe Renault, who will speak at the French electric mobility symposium at the opening ceremony on 20 May. Their initiatives include not only second-life energy storage uses for old BEV batteries, but also large-scale grid projects, such as the smart island being built in Belle-Île-en-Mer.

At the Electric Vehicle Symposium 32, we expect Gilles Normand to speak about his extensive experience in the mobility industry across the globe, having been responsible for units from Japan to Latin America, as well as Africa, the Middle East, and of course Europe. A broad perspective with the technical foundations provided by the mobility industry is the kind of approach that will be needed if the global transport industry is to turn itself around in the next years. But beyond his personal experience, he will likely also share the experiences gained by Renault in their hydrogen mobility ventures, as well as the above-mentioned smart island, which combines grid technology with electric mobility. He will no doubt extrapolate on the efforts to kick-start a European battery cell manufacturing initiative meant to supply the continent’s growing EV industry. A brief preview of Normand’s vision can be seen in the following video:

Speakers line up for the EVS32