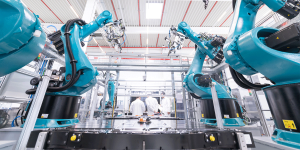 The German automobile supplier Dräxlmaier, located near Stuttgart, is starting series production of the 800-volt total battery system for the Porsche Taycan. For this purpose, the Bavarian company built their first battery assembly plant on an area of 10,000 sqm.

According to Dräxlmaier, highly automated production facilities have been set up in the building over the recent months: “The battery modules are set automatically, additional components are assembled and extensive tests are finally carried out. In addition to production, the new site will also house a development department dedicated to innovations in the battery sector,” a press statement said.

Details of the overall battery system for the Porsche Taycan have neither been revealed by the supplier nor by Porsche to date. However, in January it leaked out that the series Taycan will be equipped with around 90 kWh battery capacity and a 22 kW charger (AC) on board. A short time later it was announced that the electric sports car would be available with two battery options, starting with the larger package.

The following key performance data has been officially confirmed so far: Thanks to two electric machines with a system output of more than 440 kW, the Taycan accelerates to 100 km/h in “significantly less than 3.5 seconds” and 200 km/h in less than twelve seconds. The maximum range is over 500 kilometres according to NEDC. And thanks to the 800-volt architecture, it should be possible to recharge sufficient energy for a range of 100 kilometres in four minutes on corresponding HPC fast chargers. According to information from electrive.net, the DC charging capacity has also already been determined: it will be 250 kW.

Meanwhile, Porsche is in the process of setting up an infrastructural framework before the market launch of the Taycan, among other things by cooperating with Electrify America in the USA and awarding ABB a contract in Japan.

The Dräxlmaier Group got involved in the development of energy storage systems at an early stage in 2009. According to the manufacturer, the first prototypes were soon followed by concept orders for batteries in plug-in vehicles from premium brands. The Bavarian’s current customer base includes Audi, BMW, Jaguar, Land Rover, Maserati, Mercedes-Benz, Mini, Porsche, VW and several unspecified Californian automakers, one of which is probably Tesla. Founded in 1958, the long-established company employs around 70,000 people at 60 locations in more than 20 countries.