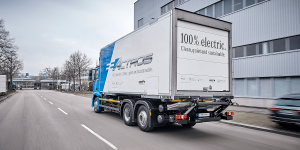 These include the Mercedes-Benz eActros, the Freightliner eCascadia and the Freightliner eM2. As part of the partnership, Daimler Trucks & Buses will develop the battery systems and assemble the battery packages at the Mercedes-Benz plant in Mannheim and the Detroit plant in the US state of Michigan. As far as Mannheim is concerned, Daimler had already announced at the beginning of the year that it intended to invest a mid-double-digit million amount in the Mannheim plant. Part of the agreement reached with the works council at that time included the start of battery assembly for the eActros.

The scope and price of CATL’s deliveries are not known. Gesa Reimelt, head of the new electromobility unit E-Mobility Group Daimler Trucks & Buses, founded in mid-2018, merely emphasises in general that it is the company’s own claim to be the first in the world to bring emission-free local transport solutions into series production. And: “The cooperation with our strong global partner CATL is an important element for the series production of our electric trucks from 2021 onwards”.

The eActros with a range of up to 200 km has been in intensive customer use in Germany and Switzerland since 2018. In the USA, the medium-heavy Freightliner eM2 and the heavy Freightliner eCascadia are simultaneously undergoing practical tests with customers.

What is not new is that Daimler and CATL are also cooperating in the passenger car sector. The Stuttgart-based company is procuring battery cells with a total volume of more than 20 billion euros to cover the demand for its electric offensive until 2030. CATL is one of the suppliers. The Chinese will supply Daimler as well as other German car manufacturers from their planned plant in Erfurt.