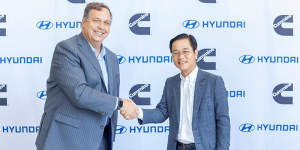 Initial development will focus on the North American commercial vehicle market, including working with OEMs to integrate these systems into their vehicles.

The companies will also explore the possibilities of jointly developing next-generation fuel cell systems. The development of stationary power generators with fuel cell technology is also on the agenda.

Above all, Hyundai Motor Company intends to use this cooperation to expand their presence in the North American commercial vehicle market. Cummins, on the other hand, gains another manufacturer that relies on the know-how of the US company. Cummins has not only built up this know-how itself, but also through strategic acquisitions over the past two years. In October 2017, the battery specialist Brammo was taken over. A few months later, Johnson Matthey’s British division, which specializes in electric and hybrid vehicles, moved into Cummins’ portfolio. Johnson Matthey specializes in battery systems for electric and hybrid vehicles. And less than six months later, the US company took over the electric drive specialist Efficient Drivetrains (EDI). The last step was the acquisition of the Canadian fuel cell manufacturer Hydrogenics Corporation in July 2019.