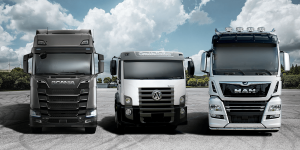 Volkswagen’s commercial vehicle subsidiary Traton announced that its MAN, Scania and Volkswagen Caminhões e Ônibus (VWCO) brands would invest a total of more than one billion euros in e-mobility by 2025.

“Our goal is to become the leading provider of e-trucks and e-buses,” explained Traton CEO Andreas Renschler, mostly through research and development. Traton is developing a common modular electric powertrain to be used by all brands, much like Volkswagen’s MEB platform.

Scania and MAN will use the new system for the first time in new series electric buses in 2020, and each brand may adapt the modular drive to application and image. Traton has also introduced a cross-brand development budget for electromobility and teams from all over the Group are working on the next generation of e-drive systems, battery management, and the compatible frame structure. CEO Renschler reckons that “every third of our trucks and buses can have an alternative drivetrain, most of them fully electric,” in this way in the next 15 years.

Across Volkswagen’s CV division, Scania leads in sustainable transport solutions. MAN pursues a broader strategy ranging from light to heavy commercial vehicles in the portfolio. And VWCO’s approach is to offer tailor-made solutions with the best value for money ratio, especially for markets in Latin America and Africa. The brand, formerly VW Truck & Bus, had been working on an architecture called e-delivery for two years reportedly.

So, first initiatives are underway, such as the 1,600 truck-order from the Brazilian beer and beverage producer Ambev. Deliveries are scheduled to begin in 2020. More so, VWCO has announced the formation of an e-Consortium at its Brazilian R&D and production complex, thus establishing a full support structure for its electric trucks and a fully integrated supply chain.

Later in 2019, Scania plans to put an autonomous and electric bus in operation for Nobina in the Stockholm metropolitan area. Together with Asko, Norway’s largest food wholesaler, Scania is also testing fuel-cell trucks, and Asko will also trial a battery-electric solution in future.

Also, MAN is running tests with customers in Austria; an extended production of the eTGM for further trails is scheduled to start this year. MAN claims to have sold more than 150 eTGM in the past 12 months.

Overall, Volkswagen is following demand and expects that the total cost of ownership (TCO) for battery-powered vehicles will reach price-parity with comparable ICE models “in the mid-term”, due to the common platform but also battery cells becoming less expensive. Traton CEO Renschler adds, however, that “the infrastructure for alternative fuels and electricity must be fully available to guarantee seamless operation,” especially in the commercial vehicle sector. Again, the Volkswagen Group comes in handy here; Porsche uses MAN’s eTGE for the Taycan logistics and the cooperation includes high power charging as developed by Porsche Engineering and the same the Ionity network uses.