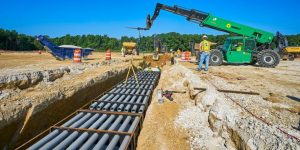 In concrete terms, GM is planning a 2.3-billion-dollar joint venture with the South Korean battery cell manufacturer LG Chem. The joint venture, in which both partners will each hold 50 per cent of the shares, is to build a corresponding plant in Lordstown in the US state of Ohio. The ground-breaking ceremony for the cell factory, in which more than 1,100 new jobs are to be created, is expected to take place in mid-2020. GM states the capacity of the planned factory in an announcement with more than 30 GWh, which is flexibly expandable. Electrek reports “more than 100 GWh”, but without naming a source.

There had been rumours of battery cell production in Lordstown since September when General Motors had talked about the plans in talks with the US car union United Auto Workers to settle a strike. Even then there was talk of a partner, but names and the planned order of magnitude were not mentioned.

The self-explanatory goal of the still nameless joint venture is to bring costs per kilowatt-hour “to an industry-leading level”. To achieve this, the companies name “state-of-the-art manufacturing processes” that produce little waste and scrap and “strong economies of scale across the entire value chain. Bloomberg New Energy Finance published an estimate this week that battery prices could fall below 100 dollars per kilowatt-hour by 2024 – from currently 156 dollars. In a telephone conference with American journalists, the companies are said to have confirmed that they also see themselves on the way to costs of less than 100 USD/kWh.

The cooperation also includes a development agreement. The plant should also be extremely flexible to be able to adapt to new developments in technologies and materials research.

“Combining our manufacturing expertise with LG Chem’s leading battery-cell technology will help accelerate our pursuit of an all-electric future,” said Mary Barra, chairman and CEO of GM. “We look forward to collaborating with LG Chem on future cell technologies that will continue to improve the value we deliver to our customers.”

Barra also emphasised that “with this investment, Ohio and its highly skilled people will play a key role in our journey toward a world without emissions. It should be noted, however, that GM sold its former vehicle plant in Lordstown to Lordstown Motor Corp. However, the company does not yet have a vehicle on offer. Founder Steve Burns is the former CEO of Workhorse and wants to build commercial electric vehicles at the plant, including for US Postal Service. But this is not yet the case in dry cloths.

According to the announcement, the first GM model with the battery cells from Lordstown will be a pickup model planned for autumn 2021. The vehicle will probably be built in Detroit-Hamtramck. In October there were also rumours that an electric pickup from GMC and an electric SUV for Cadillac will follow soon.

The Korean company also emphasised the advantages of the new partnership, but also seems open for more. “Our joint venture with the No. 1 American automaker will further prepare us for the anticipated growth of the North American EV market,” said Hak-Cheol Shin, Vice Chairman and CEO of LG Chem. He also expects the partnership to provide “insights into the broader EV ecosystem”.

Update 15 January 2020: General Motors has now selected a 64-hectare site for the battery cell plant in Lordstown, Ohio, planned jointly with LG Chem, and applied for the building permits for the plant. Since the plant is to be built partly on wetlands, GM wants to restore an area twice as large in the same county, according to a local media report.

GM is thus buying land that previously belonged to the company. However, General Motors had sold the land as part of Chapter 11 insolvency in 2009.

Update 25 March 2020: General Motors has officially completed the land purchase for the planned battery cell plant in Lordstown in the US state of Ohio planned with LG Chem on March 23. The purchase price for the 70 hectare site is 5.1 million US dollars. Construction for the facility is estimated to cost around $2.3 billion.

Update 20 May 2020: The announced joint venture between General Motors and LG Chem for the serial production of battery cells is called Ultium Cells. As GM announces, the preparatory work for the construction of the future plant in Lordstown, Ohio, has begun. GM has confirmed that the Cruise Origin, Cadillac Lyriq and GMC Hummer EV will all receive the new Ultium battery system.

Update 30 July 2020: After the groundworks in Lordstown started in May, Ultium Cells has now erected the first steel structures. According to GM, the construction phase will last until this fall. According to the company, up to 1,100 jobs will be created at the Ohio plant.

The first models with the Ultium batteries are all still on schedule despite the pandemic. The first of the vehicles, the Cadillac Lyriq, is to be presented virtually next week.