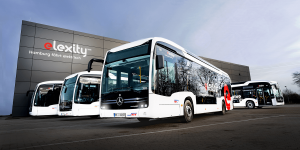 Public transport operator Verkehrsbetriebe Hamburg-Holstein (VHH) has now taken delivery of its 16 Mercedes-Benz eCitaro electric buses ordered in April 2019. Another four eCitaro solo buses and 17 eCitaro G articulated buses are to be delivered by the end of the year.

With this delivery, Daimler missed the target date by several weeks: The order was placed at the end of 2019.

The eCitaro will be used by the VHH in the Hamburg Transport Association (HVV). Starting this year, the VHH has exclusively been procuring emission-free buses for use in the Hamburg city area. This acquisition follows a decision by the Hamburg Senate, according to which only fully electric buses may be purchased for the Hanseatic City from 2020. The buses now delivered are painted white, with a striking red “e” and the lettering elexity on the side. Under this brand, the VHH brings together all aspects of sustainable mobility.

For the battery, the VHH has opted for the largest possible configuration with twelve modules, with a total capacity of 292 kWh. The plan is for the buses to be able to run all day with this range and only be recharged at night at the bus depot in Hamburg-Bergedorf using a smart load management system – there are no plans for rapid intermediate charging en route. For the drive, the eCitaro relies on the ZF AVE 130 electric portal axle with electric motors on the wheel hubs. The peak power of the motors is 2 x 125 kW, the torque is 2 x 485 Nm. According to Daimler, the interior of the buses from the Hamburg order features glazed side wall segments in the standing area, three double-width doors, USB charging sockets for smartphones, an eye-catching design of the seat cushions and a floor covering in wood look.

By the end of the year, the aforementioned 21 additional eCitaro (four solo buses and 17 articulated buses) are to be handed over to the VHH. In addition, the VHH ordered 17 battery-powered MAN Lion’s City e in December. The first units were delivered shortly before Christmas, with the others to follow in the second half of 2020.