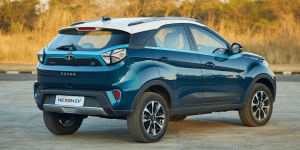 Tata Motors has launched the Nexon EV in India and confirmed three other new electric cars coming in the next 24 months. The Indian Group is looking beyond EV manufacturing to include battery manufacture, charging infrastructure and building a battery recycling plant.

Two of the biggest hurdles to producing affordable electric cars in India are the cost of imported batteries and lack of charging infrastructure. Tata Group used the launch of the Nexon EV to announce the expansion of their electric vehicle ‘ecosystem’, in order to address these issues and accelerate the uptake of electric cars in the country. This approach involves a number of other Tata Group companies including Tata Power, Tata Chemicals, Tata Autocomp, Tata Motors Finance and Croma.

Guenter Butschek, managing director at Tata Motors, which also owns the British luxury car brand Jaguar Land Rover, said: “This is the launch of an ecosystem, which is the real need, not just another vehicle launch.”

Tata’s new, purely electric SUV comes with CCS2 compatible charging system, features a 30.2 kWh battery pack and a single electric motor that delivers 95 kW of maximum power. The Nexon EV can be fast-charged to 80 per cent in 60 minutes. Introductory prices for the Nexon EV start at INR 13.99 lakh (about 19,600 USD) and the SUV is available in three variants: XM, XZ+ and XZ+ LUX.

Tata Motors announced that the Nexon EV will be available at 60 dealerships across 22 cities making it, they say, currently the most widely available EV in India. If consumer trends are anything to go by, the fact that just a few days ago, the rivalling company MG Motors sold out its all-electric SUV ZS in less than a month, should be a positive sign also for Tata Motors.

With regard to infrastructure, Tata Motor plans to expand on the 100 fast charging points in the country they already have installed. The company’s CEO Praveer Sinha said will add another 650 in more than 20 major Indian cities over the next year.

Tata has also confirmed 3 other EVs coming in the next 24 months including another SUV, a sedan and a hatchback. Other than confirming that the upcoming EVs will use their Ziptron technology, the Indian company did not reveal other details of the new launches.

In order to keep the price of their electric vehicles low, Tata Motors is entering into battery manufacturing, since batteries are usually imported into India, making them expensive. On this front, the company will be collaborating with Tata Chemicals, which is working on manufacturing lithium-ion battery cells, exploring both active chemicals manufacturing as well as battery recycling.

Tata Chemicals CEO Ramakrishnan Mukundan said that they have built a battery recycling centre and are setting up a battery manufacturing plant that should be ready within three years. The plan is to invest 113 million USD in the plant that should have an initial capacity of 200 megawatts with potential to scale it up to 2 gigawatts, depending on demand. Tata Motors is also working with Tata Autocomp for the localisation of the battery pack and motor assembly.