Other Chinese manufacturers BAIC and SAIC follow in the other places. The German automobile groups BMW and Volkswagen came fifth and sixth. These are the results of the Electromobility Report 2020 of the Center of Automotive Management (CAM).

In the so far mostly tight duel between Tesla and BYD for the crown in global EV sales, two crucial topics dominated last year – the launch of Tesla Model 3 sales outside the USA (and the further production ramp-up in Fremont) and the cutback of significant subsidies on the Chinese market in the middle of the year. While the latter led to BYD’s electric car sales falling slightly, Tesla was able to benefit from its smallest model to date fully: With more than 300,000 sales worldwide, Model 3 alone would have taken first place ahead of BYD. 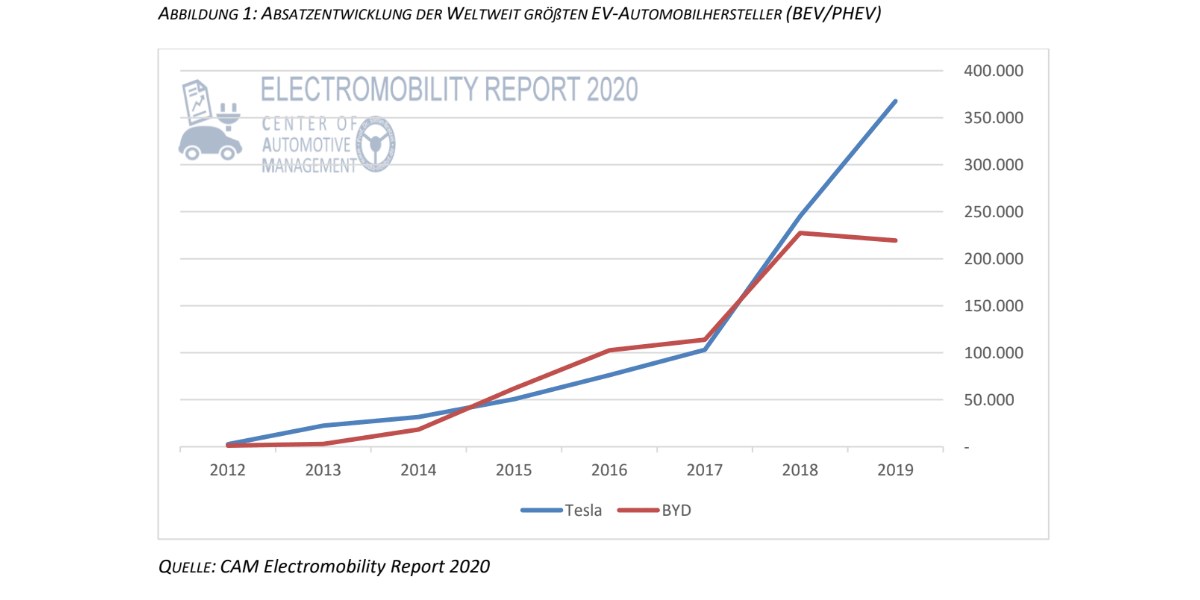 Because of these two trends, Tesla has outperformed BYD not only in the past year but also in total e-car sales. The CAM calculates here the sales since 2012, i.e. the launch of the Model S – the Tesla Roadster is therefore left out. Since the Model S, Tesla has sold about 900,000 electric cars, while BYD only has about 750,000 electric vehicle sales due to the decline in 2019.

The sales expectation of around 500,000 electric cars in 2020, as stated in Tesla’s quarterly report for Q4 2019, is “definitely achievable”, and Tesla will probably become the electrified vehicle market leader “by a clear margin” also in 2020. “Nevertheless, the achievement of the target depends to a large extent on the volatile conditions in the Chinese automotive market, which, in addition to the trade conflicts with the USA, is currently being severely hampered by the coronavirus epidemic,” says the CAM.

Head of the study Stefan Bratzel sees Tesla’s sales successes primarily in the innovative leadership of the Californians and attests the pure electric car manufacturer “two to three years ahead”. “This applies to the battery’s core module, including the charging management, to the rapid charging infrastructure, and the software architecture and networking of the vehicle,” says Bratzel. “Nevertheless, manufacturers like Volkswagen have the potential to catch up and take over market leadership by the mid-2020s if they focus consistently. 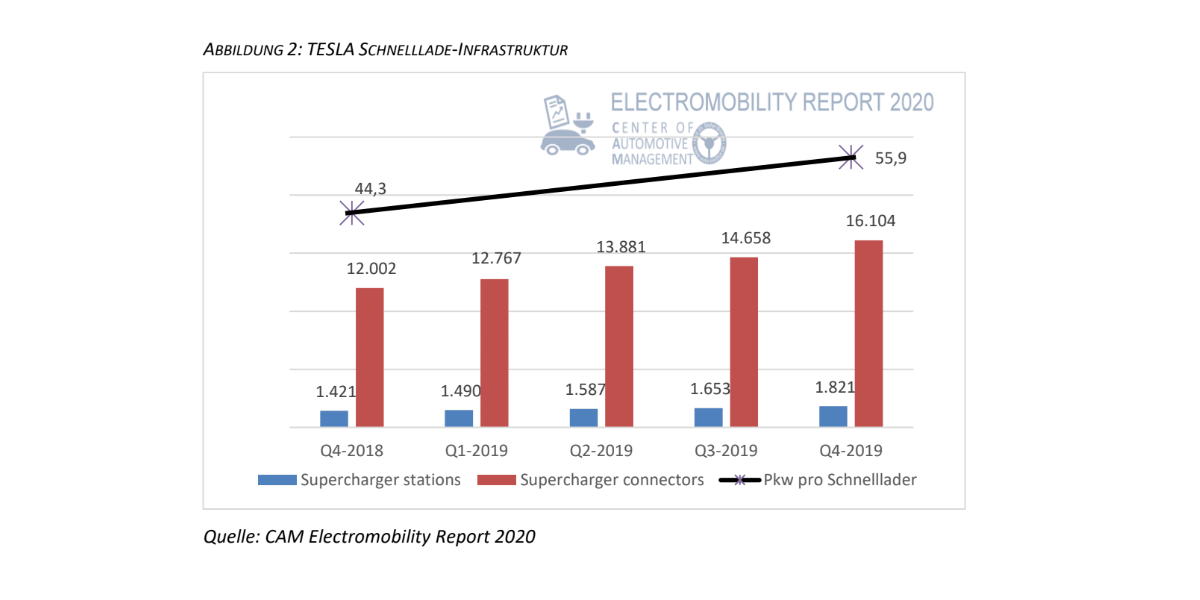 However, it remains to be seen how the competitive advantage of the Supercharger network will develop worldwide – this does not mean local price differences for the profitability of the store, but rather a reliability on long-haul routes. With 1,821 Supercharger charging parks (+28 per cent) offering 16,104 charging points (+34 per cent), the Tesla charging network has grown more slowly than sales. In other words, if 44 Tesla passenger cars shared one charging point at the end of 2018, by the end of 2019, 56 passenger cars will have to share one charging point. “In the long term, this could limit the market ramp-up if, for example, queues were to form more frequently at the charging stations during peak periods, as was recently the case in the USA on Thanksgiving,” writes the CAM. But: “Tesla operates over 500 charging stations with more than 4,700 charging points in 24 European countries alone, giving it a clear lead over its competitors.

In Germany, there was still a “considerable need for action” concerning the number of fast and regular charging points and their actual availability and technical reliability. Besides, there is the recent price debate. “Uncertainty among prospective buyers due to non-transparent and high electricity prices is also poison for the acceptance of e-mobility,” said Bratzel.