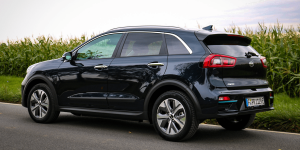 Kia will be initially concentrating on getting its electric models to Europe before attempting to satisfy demand in the USA due to limited availability of batteries. The awkward situation for the popular carmaker was revealed in an interview with a top Kia manager in the USA.

The decision to prioritize the European market lies in the company’s battery supply problems and the threat of missing European CO2 targets. This has forced Kia to focus on getting their immediately available electric cars registered in Europe to bring down overall fleet emissions, at the expense of failing to meet the demand in the USA. Steve Kosowski, Kia’s US strategy manager, has now said in an interview with electrek, that “the priority is Europe. If we could get more [electric] cars here, we would sell them.” He feels that the company could be selling two or three times as many electric cars as is currently the case. Looking forward, he indicated that the number of Niro EV (sold in Europe as Kia e-Niro) could increase strongly in the second half of this year, but that this is currently uncertain because of the said battery supply issues.

This very battery supply problem is also why the Kia e-Soul will not be offered in the USA before 2021. “We know there’s demand for the Soul EV. But if we’re only going to get 3,000 batteries allocated to North America for 2020, and we want to maximize our business, then we’d like to put all our chips on Niro EV,” Kosowski said.

These delays fly in the face of Kia’s global plans. In its ‘Plan S’ strategy, Kia has not only announced 11 BEVs until 2025 but also defined clear e-sales targets for the individual regions. According to Kosowski, BEVs should already account for 20 per cent of brand sales in 2026. This would correspond to around 125,000 electric Kias, but with the afore-mentioned battery supply problems, Kia’s sales of the Niro EV in the USA in 2020 would be just 2,000.

When asked why Kia had failed to ensure an adequate supply of batteries, Kosowski said, “The short answer is: I don’t have an answer. To be frank, it’s a little surprising that here we are, and now we have supply issues for the globe and Europe.” He also hinted that stricter regulations worldwide and the uncertainty about them were “probably a factor”. These kinds of global distribution decisions are made at the head office in Soul, as Kosowski admits, “in the end, the Kia Motors Corporation makes important decisions.”

Kia’s prioritization of BEV distribution in Europe was already indicated last summer. Emilio Herrera, Chief Operating Officer of Kia Europe, announced last August that the Korean company wanted to reduce emissions utilizing battery-electric cars, indicating that Korean head office was staunching opposed to putting the company in a position where it would accrue CO2 fines. According to “contingency plans” outlined at the time, Kia could completely convert its car-sharing business in Spain to electric drives or introduce lower-emission tyres for each vehicle. Besides, all company cars, dealers’ demonstration cars and service vehicles could be converted to electric drives. In other words, electric vehicles would be preferred to be brought into internal fleets for CO2 values (the main thing is that they are registered in Europe) rather than being delivered to paying customers in the USA.

The battery question is at the forefront of all the (electric) carmaker’s concerns. Kia is by no means alone with the problem; battery scarcity has already brought electric car production at Jaguar (or the contract manufacturer Magna) and Audi in Brussels to a standstill. Although in these cases perhaps more likely due to problems during the production ramp-up at LG Chem, not due to a lack of purchasing volumes. Mercedes is also said to have postponed the US start of the EQC due to a shortage of batteries to be able to sell the existing vehicles in Europe. And in this case, too, the Group cited a “strategic decision” for the US delay.

It remains to be seen how Kia deals with its battery supply problems. In terms of Kia’s plans for the USA, not all of the eleven new models will be released in there. “It’ll be more than three models. It’s possible that we could have up to five or six EVs,” Kosowski explained in the interview. He gave assurances that the production vehicle based on the Imagine by Kia study will still be launched in the USA in 2021.