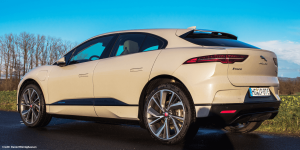 Jaguar is suspending production of its electric SUV I-Pace in Graz, Austria this week due to battery cell supply problems. The British firm gets its batteries from the LG Chem plant in Poland. Mercedes is also suffering from lack of battery cells among other issues.

Both company’s struggles reflect the common challenge for carmakers to meet rapidly increasing demand for electric cars with new and relatively fragile supply chains. Although the I-Pace from Jaguar has proved popular, growth in electric vehicles additionally accelerated by government emissions limits, in Britain, for example, Ministers announced last week that they would impose a ban on the sale of new petrol and diesel cars from 2035. While in Germany, it seems Mercedes will be struggling to meet its emissions targets.

On Sunday, British newspaper The Times wrote that Jaguar is suspending production of the electric SUV “for one week starting Monday next week” because lithium-ion batteries are running low. When electrive asked Jaguar Land Rover for comment, a spokesperson confirmed that production of the I-Pace “had to be reduced at short notice due to a supply bottleneck”. The British company’s spokesperson iterated: “Together with the supplier, we are working on a solution to minimise the impact on customer orders.”

Jaguar Land Rover itself does not manufacture the I-Pace, but by Magna Steyr in Graz in Austria, where the 4.68-meter-long electric SUV is produced on an assembly line together with the compact E-Pace SUV (which, despite the name, is only on offer with an internal combustion engine). The batteries come from LG Chem’s plant in Wroclaw, Poland.

Jaguar is by no means the only carmaker to encounter production problems due to a battery shortage. According to Belgian media, a lack of battery cells from LG Chem’s Polish plant is also why Audi announced shortening work for the Brussels plant in January.


At Mercedes-Benz, too, there were rumours and media reports that company headquartered in Stuttgart had cut the sales targets for the EQC – again because of the lack of battery cells from LG Chem. A spokesperson told electrive, however, that they were still planning on 50,000 units and “had bought cells from various suppliers accordingly”.

In a recent report, German business and trade publication Handelsblatt made mention of the battery problem at Mercedes among several other issues. The reason that only 700 BEVs were sold in Germany in 2019 was “a lack of battery cells and too little knowledge of cell chemistry”. In comparison, competitor BMW sold more than 9000 electric cars in Germany, Tesla even almost 11,000. Referring to corporate groups, Handelsblatt writes that Mercedes is struggling with the fact that LG Chem is unable to supply sufficient cells of consistently good quality. Besides, problems are also arising at Daimler’s battery assembly facility in Kamenz in Germany, where the cells supplied are used to assemble ready-to-install batteries. The German luxury carmaker has issues with cell thickness growth and heat management.

To achieve the plans set out by Daimler boss Ola Källenius, the company’s engineers in Stuttgart, Bremen, Kamenz and at LG Chem will have to get these problems under control quickly. To get the company back on track after three profit warnings, the Zetsche-successor is planning a more consistent orientation towards sustainable luxury cars, according to Handelsblatt. One solution mentioned will be to merge the CLS four-door coupé sedan and the AMG-GT four-door into one model series with electric drive.