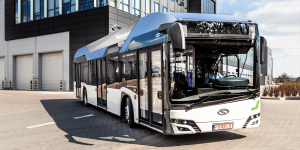 Dutch public transport operator Connexxion has ordered twenty Urbino 12 hydrogen buses from Solaris. The fuel cell buses are to be deployed in the south Netherlands from the end of next year.

The Solaris hydrogen buses will be put into operation by Connexxion, belonging to the Transdev Group. The two Dutch provinces of Hoekse Waard and Goeree-Overflakkee make up the most populous region in The Netherlands along the North Sea coast. The contract includes a 12-year servicing agreement.

“Our roads are becoming busier and busier. The health of our passengers and residents is of utmost importance to us, therefore putting into service of vehicles ensuring cleaner air is a great step forward,” says Floor Vermeulen, regional minister for Traffic and Transport in South Holland province.

Solaris Urbino 12 hydrogen buses use a set of fuel cells with a power of 70 kW. Hydrogen is stored in gaseous form in 5 new-generation tanks installed on the bus roof. The set of type 4 composite tanks are placed longitudinally above the first axle of the vehicle and have a total volume of 1560 litres.


The batteries are charged either by recuperation during braking, by the fuel cell or by a plug. Should the hydrogen run out, the Urbino 12 hydrogen can also be refuelled at a charging station. The bus is driven by an axle with two integrated electric motors, each with an output of 125 kW. Solaris indicates a range of up to 350 kilometres. The hydrogen is stored in gaseous form under pressure levels of 250 atm in five containers arranged alongside the roof.

The hydrogen fuel-cell buses are financed under the JIVE and JIVE2 projects. Solaris gained its first hydrogen experience during the development of battery buses with fuel cells as range extenders. As part of the JIVE project, Solaris delivered two Urbino 18.75 electric buses to Hamburg and 10 trolleybuses to Riga. In both cases, the vehicles were equipped with fuel cells as range extenders. The Urbino 12 hydrogen buses were then developed and put into series production with the information gleaned from the early experience with fuel cell technology.

Solaris is benefitting from its lack of hesitation to adopt the new technology and currently managing a number of large new contracts. The same model will be delivered also to Cologne and Wuppertal in Germany. Another operator ready to deploy fuel cell buses in the Netherlands is Qbuzz, that opted for Van Hool.