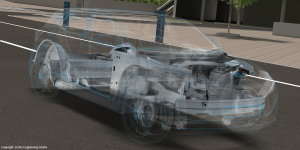 The Hessen Agentur, a service company and think-tank from the German state of Hessen, has funded the research project with an unspecified budget. Over 18 months, a flexible storage solution is to be developed for integration into the Scalebase electric car floor presented last year.

Instead of the batteries in the Scalebase, the customer will then be able to configure the hybrid storage system according to the range requirements. With batteries for daily journeys and hydrogen for longer-distance travel, EDAG says it wants to combine the advantages of both drive alternatives. The development service provider will contribute its expertise in vehicle integration, while its partner Hexagon Purus adds composite high-pressure tanks and systems for automotive use. EDAG has not provided any details of the targeted capacities in the company’s corresponding press release.

The Scalebase is a floor assembly for what the German company with headquarters in Switzerland says is applicable for “almost all mid-range and luxury-class electric cars” and should be able to be flexibly adapted to the customer and production. All that is defined is the distance between the front wheel and the heel point of the electric vehicle (i.e. the point at which the driver’s heel touches the floor of the interior). All other length dimensions and width can be varied.

While EDAG has already found a first customer for the Scalebase, there are no statements as yet about a possible series partner for the hybrid system. It remains to be seen how the environment for the use of fuel cells in passenger cars will develop in 18 months. Volkswagen has largely abandoned the fuel cell, and Daimler is also focusing on its use in trucks. Production of Daimler’s GLC F-Cell, the only fuel cell passenger car whose battery was not only a buffer storage unit but could also be charged by cable, will be discontinued without a successor.

Other combinations of fuel cell and battery-electric systems are currently in use in the form of battery electric vehicles with fuel cell range extenders, usually for larger vehicles. For example, Renault is equipping its Kangoo Z.E. and Master Z.E. electric vans with a fuel cell system that is a range extender, not as the primary source of energy.