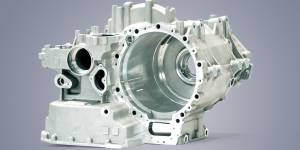 The BMW plant in the Austrian town of Steyr produces all the housings for the electric drive for the BMW iX3. By 2025, the company want to increase annual production capacity to 460,000 units, given an indication of its hopes for next-gen vehicles.

In BMW’s fifth-generation electric drives, the electric motor, transmission and power electronics are located in a common housing. The fully integrated drive component is designed to save installation space compared to three separate housings. Besides, the new solution should be more easily scalable, so that drive units can be produced to accommodate various power stage – on a common production line, as BMW now emphasizes. A total of five different housing variants are available.

However, the Austrian BMW plant will only be responsible for the mechanical processing of the 22-kilogram component, such as turning and milling. The casting itself is produced at the BMW plant in Landshut and then processed further in Steyr. After that, the parts still have a long way to go: as is well known, the iX3 is built in China. But from next year, the electric drive housings from Steyr will also be installed in electric cars in Germany when production of the i4 starts.

In several expansion stages, which are not specified in detail, the capacity in Steyr is to be increased to up to 460,000 units in 2025. In the recently opened electric drive production competence centre in Dingolfing, the housings will then receive their inner workings before being delivered to the vehicle plants. In addition to the fifth generation electric drives for the upcoming iX3, i4 and iNext, the electric motors for the i3 and BMW’s PHEV models are also assembled in Dingolfing. For this reason, the planned capacity in Dingolfing (500,000 e-drives as early as 2022) is higher than the targeted housing production in Steyr.