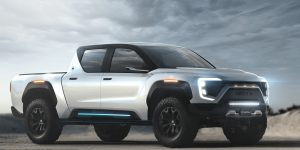 GM will manufacture both the BEV and the fuel cell version of the Badger for Nikola from the end of 2022. The carmaking giant will also develop the pickup to the production stage and take over the homologation. For is part, Nikola will take over the sales and marketing for the electric pickup truck, which is to be presented in Arizona in early December. Nikolas says that “to celebrate this announcement”, it is now accepting pre-orders for the Badger for a $100 deposit.

As part of the agreement, Nikola will also use General Motors’ Ultium battery system and Hydrotec fuel cell technology. In total, the agreed contributions in kind comprise around two billion dollars, which Nikola will pay with its own shares. The financial benefits for General Motors are estimated at four billion dollars. The companies expect the deal to be approved by the regulatory authorities in September.

Apart from Europe, GM will also become Nikola’s exclusive fuel cell supplier not only for the Badger but also for the Class 7 and 8 trucks. Nikola expects to save around four billion dollars on the powertrain and over one billion dollars in engineering and validation costs over ten years.

The restriction for the European market is important because Nikola has already reached an agreement with Bosch that the German supplier will supply Nikola not only with the E-axles but with the entire fuel cell system. This should then probably only concern the fuel cell version of the Nikola Tre, which is to be built in Ulm from 2023. The US models from the Arizona plant currently under construction should then be equipped with GM technology. Not unimportant in this regard, is that Bosch also has a stake in Nikola Motor.

As Nikola writes in the press release, the strategic partnership should enable cost reductions in various programs, including the Nikola Tre. To what extent GM technology will be used in the Tre – which is based on an Iveco S-Way – is not yet clear.

The 11 per cent stake also gives General Motors the right to appoint a director, although who will take over this position and what function they will be given in the process has not yet been revealed.

“By joining together, we get access to their validated parts for all of our programs, General Motors’ Ultium battery technology and a multi-billion dollar fuel cell program ready for production,” said Nikola CEO Trevor Milton of the benefits to the company he founded. “Nikola immediately gets decades of supplier and manufacturing knowledge, validated and tested production-ready EV propulsion, world-class engineering and investor confidence.” He concluded that “most importantly, General Motors has a vested interest to see Nikola succeed.”

At the same time, the deal looks pretty rosy for General Motors too. GM CEO Mary Barra emphasises the advantages for her own company that go beyond possible financial gains from shareholding. “We are growing our presence in multiple high-volume EV segments while building scale to lower battery and fuel cell costs and increase profitability,” Barra said.