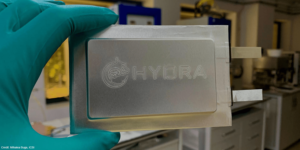 Even though the partners chose a ship battery as a demonstrator, the knowledge gained in the Norwegian SINTEF Institute’s project should be transferable to other battery-electric vehicles – i.e. cars, trucks and buses. A total of twelve research institutions are involved in HYDRA, coming from Italy, France, Sweden, Norway, Germany, Romania, the UK and Belgium.

They focus on sustainability: The novel cells’ electrodes are to be free of cobalt and contain 85 per cent less environmentally harmful raw materials. Thus, according to DLR, the cells rely instead on “unproblematic” materials such as iron, manganese, and silicon. However, at least the deep-sea mining of manganese is controversial.

The DLR Institute of Technical Thermodynamics analyses the electrochemical processes inside the novel batteries and testing their performance and long-term stability. To this end, the cells are repeatedly charged and discharged under different everyday operating conditions. This is to ensure that the electrochemical processes inside the cells are representative of practical use.


“We measure how the electrical power and storage capacity change after many hundreds of charging and discharging cycles, for example, when the power demand is high, during particularly fast charging processes, and at different temperatures,” explains Dennis Kopljar, head of the DLR’s part in the HYDRA project. “At the end, we open the battery cells and look at how the structure and composition of the materials have changed during operation.”

SINTEF uses this data from the DLR tests to simulate the chemical and physical processes in the battery. These findings are, in turn, used to adjust the electrode materials and cell design gradually. According to Kopljar, this will provide information that “designers can use to design battery systems and their operating modes to suit the application in question.”

In addition to eliminating cobalt and other critical materials, the novel electrodes are also expected to excel in sustainable and cost-efficient production. To this end, a water-based process without organic solvents is being developed as part of HYDRA.

The HYDRA project is funded by the EU with more than nine million euros and is scheduled to run until the end of August 2024.