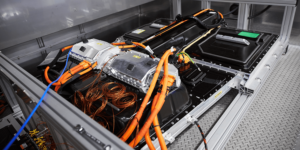 Volvo Cars plan to develop recycling loops in a global initiative to reduce CO2 emissions and expenses. This involves recycling the high-voltage batteries from plug-in hybrids and electric cars, among other things.

In total, the Swedish company wants to save 2.5 million tonnes of CO2 and one billion Swedish kronor (about 98 million euros) per year from 2025 onwards by processing, repairing and reusing emission-intensive materials in car production. This will not involve individual pilot projects but measures at all Volvo plants worldwide.

“Volvo Cars has one of the most ambitious climate plans in the car industry, and if we are to reach our goals, we need to embrace the circular economy,” says Anders Kärrberg, responsible for global sustainability at Volvo Cars. “This requires us to rethink everything we do and how we do it. We put a strong focus on integrating sustainability into the way we think and work as a company, and we are making it as important as safety has always been to us.”

As Kärrberg explains, this is not just about recycling waste and offcuts from the production of the cars, but also about further developing production processes so that material is used more efficiently and waste is not created in the first place. “Disposing of waste will become more expensive in the future,” says Kärrberg. “That’s why we want to avoid waste directly.”

When it comes to recycling, he says, even small measures are helpful. Instead of a bin for scrap metal, different metals are to be separated directly in the factory, making subsequent reprocessing much easier. Transport is also an issue the company has considered: “Logistics and transport costs are an important factor in the recycling business model,” says the sustainability expert. “As with manufacturing, localising supply chains and keeping distances short has a huge impact on sustainability.”


But not every material is suitable for recycling. “Painted surfaces and parts visible to the customer are still difficult,” says Kärrberg. However, components that the customer does not see and for which no development is necessary could be designed in the future so that they last the life of the vehicle and could later be installed in a new car.

This will probably not apply to an important environmental factor in electrified cars, the batteries. As battery developer Ulrik Persson tells electrive, Volvo’s batteries are designed to last 15 years in the vehicle. After that, they can be used in second-life applications.

Volvo is currently working on two pilot projects in this area: In cooperation with BatteryLoop, solar-powered energy storage systems are being produced from batteries of electrified Volvos. From April, the system will be used to power charging stations for electric cars and e-bikes at the business centre of Swedish hygiene and healthcare company Essity near Gothenburg, Volvo says.

Longer second-life use than in-car use

In a second project with Comsys and Fortum, Volvo will test the commercialisation of energy storage at a Swedish hydroelectric power plant. The retired car batteries will be used as stationary energy storage units to provide so-called “fast-balancing” services for the power system.

Battery developer Persson is concerned with learning how the batteries can be used for longer. “You can kill batteries in a year without any problems,” Persson says. However, with a different charging control, Volvo hopes for a disproportionately longer service life: “Compared to automotive use, the batteries there are exposed to much less aggressive cycling.”

It certainly makes a difference whether the cell is from a plug-in hybrid or a battery-electric car. “A PHEV battery is designed for 6,000 cycles, a BEV battery for 1,000 cycles. So I would prefer PHEV batteries for such projects,” Persson says. But he also admits that Volvo’s partners sometimes see it differently. “Our partners want large batteries where they get a large capacity in one go. So the economies of scale are much better with BEV batteries.”

Even the best battery has to be recycled one day. Persson believes it is illusory, at least in the coming years, for the recyclability of the battery to be taken into account in the design of the cells, as some experts are calling for. “The cell design is based on performance in the vehicle. Not only for us but also our competitors,” says the battery expert.

“The goal must be to recover battery-grade materials from the batteries that can then be used in new cells,” says Persson. “This can be done with hydrometallurgy, not by melting down the batteries.”

Incidentally, the recycling of the cells and the waste from vehicle production are Volvo’s own projects, as sustainability expert Kärrberg points out. “We do it ourselves because we believe it is a business model and also a competitive advantage,” says Kärrberg. “We are already noticing it: customers are asking more and also in much more detail. Sustainability is becoming more and more important in purchasing decisions.”