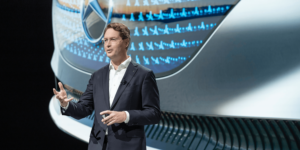 Daimler is apparently preparing for a possible earlier end to gasoline and diesel engines in Europe. Now that it seems most likely the EU Commission will significantly tighten CO2 targets, CEO Ola Källenius wants to further accelerate the electrification of the Mercedes model range.

The German publication Manager Magazin revealed the German luxury carmaker’s plans with reference to company circles. A number of electric cars of the next generation planned for 2024/2025 are now to be launched on the market a year earlier, and more than half of the current models will only have electric drives in the new version. Manager Magazin writes that the Group itself is said to be flirting with an entry into battery cell production – something it has flatly rejected until now. Källenius will probably make the accelerated electric course public before the summer break.

The German business magazine report suggests that the tightening of the timetable is based less on self-motivation and more on fears of inevitably stricter political conditions: Källenius is preparing Mercedes-Benz passenger cars for an extreme scenario such as the phase-out of internal combustion engines from 2030 demanded by the Green Party, which is looking strong before the next German federal election. However that turns out, German national policy may not even be the most decisive factor. Today it became clear that the EU Commission is apparently planning even stricter targets for CO2 emissions from new cars. The publication Politico reports that the Commission is considering raising the current CO2 reduction target for 2030 from 37.5 to 60 per cent. By 2035 a 100 per cent reduction is to apply – in effect, a ban on internal combustion engines.

Daimler has so far officially pursued the goal of achieving a CO2-free fleet by 2039. As early as February, there were indications that the company was planning an early end to the combustion engine. At the time, the German business and industry paper Handelsblatt reported, without naming any sources, that Källenius was running through scenarios on the board of management, according to which Mercedes could only offer new cars with electric units not in 2039, but five or eight years earlier.

According to the February report, the “symbol of this accelerated change” could be the next generation of the S-Class, which is apparently scheduled for launch in 2028. “If Källenius gets serious about his accelerated transition, it would presumably only exist as an electric vehicle,” writes the Handelsblatt. With the current generation of the S-Class, Mercedes still made a conscious decision to bring the S-Class as a more conventional car at most as a plug-in hybrid. The electric part will be taken over by the all-electric EQS on its own platform starting in autumn this year.

On an earlier occasion, Källenius himself hinted in an interview with Handelsblatt that the previous interim stages for sales of all-electric cars and plug-in hybrids could be revised upward to a quarter by 2025, and half by 2030. The company’s chief executive expects to be able to achieve as high margins with electric cars as with internal combustion engines by 2030.

Meanwhile, the national premium competition is also moving. Just yesterday, the German media reported that Audi no longer intends to bring out any new models with combustion engines from 2026 onwards, which also means hybrid vehicles. That being said, sales are not to end until the early thirties.

BMW is taking a more moderate approach and has set a target of at least 50 per cent global electric car sales by 2030. In addition, the Munich-based carmaker is planning to transform the Mini brand into a pure electric car manufacturer.

Update Tuesday 22 June 2021: There are increasing signs that Daimler is actually going ahead with the move into battery cell production, despite its previous reticence to do so. A few days ago the German publication Manager Magazin reported that Daimler is flirting with the production of its own cells, and now the German edition of Business Insider cites company circles, writing that Group CEO Ola Källenius has already made the corresponding decision.

What remains unclear is whether Daimler will produce the cells completely in-house or in cooperation with a partner. So far no details have been released about where and when production will start. According to Business Insider, one of the reasons for Daimler’s change of mind is the problems with the battery cell supplier Farasis Energy who have been contracted as one of Daimler’s main battery cell suppliers. Apart from the quality problems of the sample cells that was denied by both companies, another major problem appears to be that the Farasis plant is not finished yet. For Daimler to seriously pump up the volume of its battery electric vehicles, this would clearly be a problem.

Audi to release only battery-electric models from 2026

VW opens the books for the ID.4 AWD in the USA