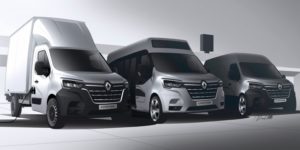 Renault and Plug Power announced the joint venture in January 2021. Renault has made it clear that it intends to become the European market leader for fuel cell LCVs with Plug Power, specialised in green-hydrogen fuel cell systems and based in New York. The joint venture is to build innovation and manufacturing capacity in France for fuel cell systems and their integration into light commercial vehicles, along with cabs and FC-powered passenger vans.

Now the two companies are naming concrete plans in more detail: By the end of 2021, Hyvia (“Hy” for hydrogen, “Via” for road) already plans to offer three light commercial vehicles (LCVs). One is the Master Van H2-Tech, a large van based on the Renault Master with 12 cubic meters of cargo volume and a range of up to 500 kilometres. In addition to the panel van, which is meant for transporting goods and parcels, there will also be the Master Chassis Cab H2-Tech, which Renault says is made for transporting larger goods with a load volume of up to 19 cubic metres – the range here is around 250 kilometres. Hyvia is targeting the Master Citiybus H2-Tech as its third model. This will be able to carry up to 15 passengers and have a range of 300 kilometres.

Hyvia calls the powertrain a “dual-power architecture”. All vehicles have a 33-kWh battery that is said to provide about 100 kilometres of range. The 30-kW fuel cell draws its hydrogen from tanks that can store between three and seven kilograms of hydrogen, depending on the model. Depending on the model, this should add between 150 and 400 kilometres with hydrogen to the approximately 100 battery-electric kilometres. The tanks are housed either in the underbody (chassis cab) or in the roof (van and city bus).

Assembly of the fuel cells is scheduled to begin at Renault’s Flins plant in late 2021. Renault says it plans to distribute the products throughout Europe. In addition to the vehicles, Hyvia also plans to offer “various financing options and maintenance services.” There is no word yet on pricing.

“To meet the challenges of hydrogen mobility, we need to offer fuel cell vehicles and the entire ecosystem,” says Hyvia President David Holderbach. “Hyvia offers turnkey mobility solutions that leverage the production, storage and distribution of green hydrogen and a wide range of H2 LCVs. These solutions will meet the new needs of businesses, large customers, fleets and local communities, and drive the energy transition as a whole.”

The hydrogen ecosystem also includes the production and distribution of green hydrogen. Here, Hyvia says it is building on the expertise of Plug Power, which already has a network of 100 H2 refuelling stations that dispense more than 40 tons of hydrogen daily.

Hyvia is headquartered at Villiers Saint-Frédéric in France along with its research and development department. The newly founded joint venture is now also operating from three other sites in France: Batilly is where the Renault Master is manufactured. In Gretz Amainvilliers, the Renault subsidiary RVI is working on the electrification of the Master as well as producing 27-tonne hydrogen-powered trucks, while the site at Flins handles not only the production of fuel cells and refuelling stations, but also logistics.