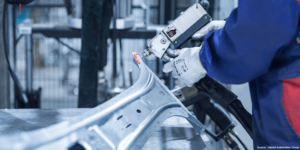 Valmet Automotive has completed expanding its car plant in Uusikaupunki, Finland, into a battery factory. The grand opening today makes Uusikaupunki the second plant, besides Salo, in the Valmet cluster to mass-produce battery systems for electric vehicles.

Valmet Automotive is planning four production lines which the company will commission in stages from now throughout 2024. The expansion of the Uusikaupunki plant into making batteries announced last December will cost around 120 million euros; the total production capacity is around 500,000 battery modules and cell packs per year.

Uusikaupunki is also home to a Valmet vehicle plant where the company acts as a contract manufacturer, making the A-Class and the GLC for Mercedes-Benz. The Uusikaupunki plant will continue to focus on vehicle production. The expansion is “an important step in the implementation of Valmet Automotive’s strategy to establish itself as a Tier 1 system supplier for battery systems and modules,” the company said at the time.

At today’s opening, Valmet stated the plant was “a milestone in realizing our ambitious EV strategy”. Olaf Bongwald, the Valmet Automotive CEO, added, “The possibility of producing electric vehicles and battery systems under one roof is a unique offering for the automotive industry.”

In addition to the production of battery systems, the company offers battery development and testing under the lead of its EV Systems business line. Valmet last year said it intends to withdraw from traditional engineering services to focus more on e-mobility as a contract manufacturer and system supplier.

Valmet Automotive now operates two plants for large-scale battery production with Salo and Uusikaupunki sites in Finland, a third battery plant will be opened in Kirchardt, Germany, in 2022.

To date, 200 people are working in the initial stage of production at Uusikaupunki. However, with the expansion of battery production in the coming years, Valmet expects the number of employees to rise substantially, i.e. there will be 500 staff working at the Uusikaupunki battery plant by 2024.

Valmet has stated repeatedly that significant from major OEMs require the above extension, however, without naming the customers. The company said that employment at the Uusikaupunki site is secure for years to come, thanks to two major orders.