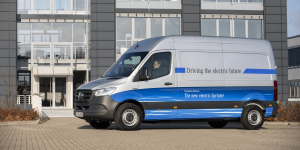 The British business unit of the parcel service provider Hermes has ordered 168 Mercedes-Benz eSprinters. The electric vans are to go into operation before the end of the year. The order is being handled by the Mercedes dealer Intercounty Truck & Van.

This is the first major investment in battery-powered vans for Hermes UK. The investment follows a trial run with two eSprinters at a depot in Enfield, north London. In addition to the 168 electric examples, dealer Intercounty Truck & Van will also procure 132 diesel-powered Sprinters on behalf of Hermes. Fleet manager David Landy is quick to give assurances that the latter diesel vehicles are only supposed to serve as a stop-gap measure.

For this reason, the parcel service will rent the eSprinters via Mercedes-Benz Finance over a longer period of time. The diesel Sprinters, on the other hand, are only leased by the company via one-year contracts through Athlon UK, a unit belonging to Mercedes-Benz parent Daimler. Hermes says that this agreement makes it possible to replace the diesel vehicles as soon as charging options are available and electric versions with a longer range and higher charging capacity are available, Hermes says.

The British offshoot of the delivery service wants to focus on equipping its ParcelShop business with electrically powered vans. ParcelShop primarily comprises shops that offer themselves as pick-up and delivery locations. In Great Britain, “more than 5,000 shops and other locations are served” by this service, it says. The logistics between the locations are handled by 450 vehicles or more at peak times.

To electrify this fleet, Hermes has contracted Pod Point to install charging points at its depots. Installation is already underway, with an initial focus on London and other cities with low emission zones.

The British charging infrastructure company, majority-owned by EDF, is also reportedly completing the construction of charging stations at 600 branches of the British retail chain Tesco in collaboration with Volkswagen. Pod Point also has a collaboration with Kia and Lidl in the UK. On its website, Pod Point states that it has now installed more than 102,000 charging points in Great Britain and Norway. The majority of these are destination chargers. According to Pod Point, around 5,200 charging points are publicly accessible – primarily at Tesco, Lidl and Center Parcs locations.