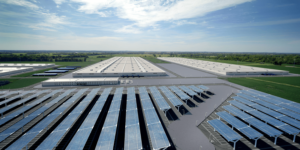 The investments will go towards a total of three battery plants – two in Kentucky and one in Tennessee – with a combined capacity of 129 GWh per year, and a new plant in Tennessee for the production of more F-Series electric pickup trucks. So far, the F-150 Lightning is slated for production at the Rouge Electric Vehicle Center in Dearborn where pre-series production of the electric pickup recently began. The market launch is scheduled for spring 2022, and Ford has high hopes for it.

In Stanton in the US state of Tennessee, Ford and SK Innovation are aiming to build a 5.6 billion dollar plant campus called Blue Oval City. The site is to include a battery plant of the Ford-SKI joint venture BlueOvalSK with an output of up to 43 gigawatt-hours, vehicle assembly for the “expanded range of F-Series electric vehicles” and a vertically integrated ecosystem in the form of key suppliers and recycling. Ford says that it is planning “one of the largest automotive manufacturing facilities in US history” in Stanton. The 1,450-acre campus is expected to create 6,000 jobs. Ford says the planned start of production at the assembly plant and battery factory is 2025.

In Glendale, Kentucky, Ford and SK Innovation are aiming to build a $5.8 billion, 600-hectare battery production complex. Dubbed BlueOvalSK Battery Park, the project envisions two adjacent factories, each with an output of up to 43 gigawatt-hours per year. The batteries produced there will be used in “the next generation of Ford and Lincoln electric vehicles”. The twin battery plants are also scheduled to open in 2025, creating up to 5,000 jobs. Ford describes the site as “centrally located to serve Ford’s North American assembly plants”. According to Kentucky’s governor, it is “the largest single investment in our state’s history”.

The investment in the three new battery plants in Tennessee and Kentucky will be made through BlueOvalSK. The joint venture is currently still in the start-up phase. Of the total investment of 11.4 billion US dollars in the two locations, Ford will take over 7 billion dollars and SKI 4.45 billion dollars. Ford says this sum is part of its more than $30 billion investment in electric mobility by 2025. Ford expects 40-50% of its global vehicle volume to be fully electric by 2030.

The fact that Ford is taking on a larger share of the investment than SKI is related to the future vehicle assembly plant in Tennessee, which will not be built under the joint venture flag, but by the car manufacturer alone. Ford also says that the plant will be equipped with state-of-the-art technology and will be carbon neutral from the start of production in 2025. Local energy sources such as geothermal, solar and wind energy will be used. Other keywords for the plans are a wastewater treatment plant and a material collection centre. The recycling or processing of materials and production waste will then take place “either at the plant or in external facilities”. Interesting in this context: Ford announced a partnership with the US recycling and materials processing company Redwood Materials only a few days ago.

Ford hopes the Blue Oval City campus in Stanton will be “a haven of technical innovation for building the next generation of F-Series electric vehicles”. The growth opportunity advised by the site is said to enable the US carmaker to reach new customers with an expanded range of electric pickups.

“This is a pivotal moment for Ford to lead America’s transition to electric vehicles and usher in a new era of clean, carbon-neutral manufacturing,” added Ford Chairman Bill Ford. “With this investment and our spirit of innovation, we can achieve goals once thought to be incompatible: protecting our planet, building great electric vehicles Americans love, and contributing to our country’s prosperity.”

Dongseob Jee, president of SK Innovation’s battery business, calls the plans a “new chapter in automotive history.” He says they are looking forward to taking this crucial step together as partners and realising their shared vision for a cleaner planet. “Our joint venture, BlueOvalSK, will embody this spirit of collaboration. We look forward to building on our trusted partnership by bringing our market-leading value proposition, experience and innovative expertise.”

SKI describes the investment in BlueOvalSK as the largest single investment in its history. The Korean company plans to invest up to US$6.4 billion by 2027. The motivation is to become the leading battery manufacturer in the US market. “By combining these plants with two other battery plants built in Georgia by SK Innovation (…) the company will be able to produce 150 GWh annually in the USA alone,” SKI says. This will enable the company to exceed its goal of reaching a global production capacity of 200 GWh per year by 2025.

For the partners’ battery joint venture, the announcement means a further upgrade. Until now, it was said that the production of battery cells and modules with an annual production capacity of 60 GWh would be targeted. This figure is now increased to the 129 GWh mentioned at the beginning.

Ford’s entry into battery production, similar to Volkswagen and other major carmakers, is intended to secure the supply of batteries from the middle of the decade. The US manufacturer is only at the beginning of its electrification plans with its F-150 Lightning, E-Transit and Mustang Mach-E electric vehicles. The US-American carmaker only recently announced that it would expand its production capacities at the Rouge Electric Vehicle Center in Dearborn. Here, Ford announced that it had already doubled production targets for the electric version of its F-150 pickup truck before its market launch. Accordingly, the US carmaker is now aiming for an annual production of more than 80,000 vehicles in 2024. Since the assembly plant in Tennessee is not scheduled to start production until 2025, Dearborn must initially manage this output on its own.