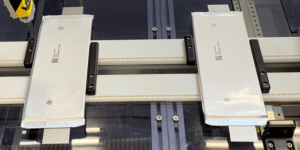 Ford and SK Innovation have agreed to set up a joint venture to produce battery cells and modules for use in the US carmaker’s electric vehicles. The joint venture, called BlueOvalSK, aims to have an annual production capacity of 60 GWh.

The partners announced their intention to build two factories, the locations of which have not yet been determined. According to SKI, the total investment in the joint venture will amount to six trillion won, the equivalent of about 43.5 million euros.

The 60 GWh serve as an initial target for the start of production around the “middle of the decade”. Ford and SKI also speak of later expansion potential in their respective announcements. A final agreement for the joint venture is to be concluded in the course of the summer. BlueOvalSK’s cells and modules are expected to be used in several of Ford’s future BEV vehicles, including the just-unveiled F-150 Lightning electric pickup.

The partnership between Ford and SKI was on the brink of collapse just a few weeks ago. In the legal dispute with LG Energy Solution, the manufacturer threatened to withdraw from the US business. In the meantime, however, the two Korean companies have come to an agreement, which should have saved the battery joint venture plans between Ford and SKI, which undoubtedly mean an intensification of the partnership. That there is to be a memorandum of understanding on such a joint venture had already been reported by Reuters yesterday.

“This MoU is just the start; it’s a key part of our plan to vertically integrate key capabilities that will differentiate Ford far into the future,” Ford CEO Jim Farley expressed on the occasion of the announcement. “We will not cede our future to anyone else.”

Kim Jun, CEO and president of SK Innovation, emphasises that “Our JV with Ford will play a pivotal role in fleshing out the electric vehicle value chain in the United States, a key objective of the current U.S. administration.” Jun thus also hints at the geographical focus of the joint venture. This is likely to be North America. This fits with the statement that Ford expects annual battery demand for its electric vehicles to be up to 140 GWh in North America and up to 240 GWh worldwide by 2030. This is roughly equivalent to the capacity of ten plants, it says.

Within the battery joint venture, Ford and SKI intend to “jointly develop and industrialise battery cells on a large scale” to adapt them to the planned BEV models. In doing so, Ford explicitly emphasises that BlueOvalSK builds on its recently announced R&D investments in battery technology and manufacturing. Ford is also planning to establish a global battery centre of excellence called Ford Ion Park in Michigan, where lithium-ion and solid-state batteries will be developed and manufactured in small series. Ford has also recently underlined its solid-state battery ambitions by joining BMW in a new round of investment by US solid-state battery specialist Solid Power.

Ford wrote: “Ford plans to lead the electric vehicle revolution – including by delivering fifth-generation lithium ion batteries as well as preparing for the transition to solid-state batteries, which promise longer range, lower cost and safer EVs for customers.” Electrification, he said, will begin with EV versions of its most popular models, including Mustang Mach-E, E-Transit and F-150 Lightning.

SK Innovation comes into play with the F-150 Lightning electric pickup unveiled on Thursday. The South Korean company was awarded the contract to supply the cells for the model. It is due to go on sale in spring 2022 with two battery options for 230 or 300 miles of range – and interest is apparently high: according to Ford CEO Jim Farley, 20,000 reservations for the model were received in the first twelve hours after the presentation alone.

Independent of the joint venture plans, SKI is expanding its production capacities in the USA after the court battle. The company currently operates a 10 GWh battery cell plant in Commerce, Georgia. There, it is scheduled to switch from trial to series operation at the beginning of 2022. A second factory with a planned 12 GWh is under construction – also in Georgia. Series production there is planned for 2023. SK Innovation currently has a global production capacity of 40 GWh. The group has repeatedly mentioned a target of 125 GWh for 2025, but is now revising this upwards: “However, with this JV, the company expects to reach a higher target of 190 GWh by 2025.”

The group is focusing on the development and commercialisation of NCM battery technology with a high nickel content. Currently, SKI sells mainly NCM-811 batteries (i.e. eighty per cent nickel, ten per cent manganese and ten per cent cobalt). However, according to the partners, the F-150 Lightning will already use a battery with 90 per cent nickel content that is in series production in the USA.

BASF is planning a cathode joint venture in China