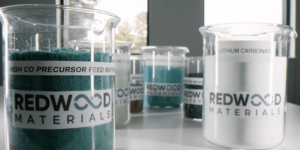 Ford and Redwood Materials are forming a strategic partnership to drive the recycling of electric vehicle batteries in the US and create a closed battery loop. Ford has also invested 50 million US dollars in Redwood.

Ford and Redwood say they will work together to integrate battery recycling into Ford’s battery strategy. In the longer term, the two new partners also aim to “develop the best approach for collecting and disassembling spent batteries from Ford’s electric vehicles for recycling and remanufacturing to reduce the cost of battery repairs and raw materials for manufacturing new batteries”. The $50 million (equivalent to just under €43 million) Ford is investing in Redwood as part of the $30 billion pot the US automaker has set aside to realise its electrification plans by 2025. The investment is intended to support the expansion of production capacities at Redwood, according to an accompanying statement.

Redwood Materials’ recycling technology is said to be able to recover on average a good 95 per cent of elements such as nickel, cobalt, lithium and copper. Just recently, the company founded by ex-Tesla CTO JB Straubel also announced the expansion of its business area beyond pure battery recycling. Starting next year, Redwood also wants to produce battery materials on a large scale from recycled materials. This, in turn, is of great interest to Ford: by using locally produced, recycled battery materials, it can reduce costs, increase the supply of battery materials and reduce its dependence on imports and the mining of raw materials, the US carmaker lists.

The recycling offensive is intended to complement Ford’s previously announced plans to secure battery supplies through several BlueOvalSK battery plants in North America from the middle of the decade. BlueOvalSK is a new joint venture between Ford and SK Innovation that will be dedicated to the production of battery cells and modules and aims to have an annual production capacity of 60 GWh. The joint venture is still in the start-up phase.

By 2030, Ford basically assumes an annual battery demand for its electric vehicles of up to 140 GWh in North America and up to 240 GWh worldwide. The company also estimates that battery costs should drop by 40 per cent to $100/kWh by the middle of the decade and further to $80/kWh by 2030. This is where the cooperation with Redwood is expected to pay off. Against this backdrop, Jim Farley, Ford’s president and CEO, even calls the new partnership “critical to our plan to build electric vehicles on a large scale in America, at the lowest possible cost and with a zero-waste approach”. The collaboration will help build an infrastructure for the cost-effective recycling of Ford’s end-of-life batteries to create a robust domestic material stream and lower the cost of electric vehicles, he said.

Redwood is currently developing processes to produce battery materials from recycled batteries. In the test phase, Redwood is using waste from Tesla and Panasonic’s Gigafactory 1 and from Envision AESC from its Tennessee plant. Investor Amazon is also contributing electronics waste for recycling.

“Increasing our nation’s production of batteries and their materials through domestic recycling can serve as a key enabler to improve the environmental footprint of U.S. manufacturing of lithium-ion batteries, decrease cost and, in turn, drive up domestic adoption of electric vehicles,” said Redwood CEO Straubel. “Redwood and Ford share an understanding that to truly make electric vehicles sustainable and affordable, we need to localize the existing complex and expensive supply chain network, create pathways for end-of-life vehicles, ramp lithium-ion recycling and increase battery production, all here in America.”

Looking ahead to its capital-intensive start-up phase, Redwood Materials just closed a $700 million funding round at the end of July. At the time, it said the money would be used to finance expansion. Specifically, among other things, the capacity of Redwood Materials’ current plant in Carson City in the US state of Nevada is to be tripled. In addition, more than 500 employees are to be hired.

However, it was recently announced that the focus is not only on building up the recycling business, but that Redwood’s area of operations is to grow in the direction of battery component production from recycled materials. The company plans to announce a concrete location for such a production facility by the beginning of 2022. The goal is to produce 100 GWh of cathode active materials and anode foils annually for one million electric vehicles by 2025, Redwood announced in the middle of the month. By 2030, the production output is to increase to 500 GWh.