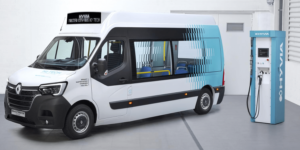 Hyvia, the joint venture between Renault and Plug Power, is following up with two more H2 prototypes, which are to be launched as production vehicles from 2022. A month ago, Hyvia had already presented near-production prototypes of the Renault Master H2-Tech panel van and a hydrogen filling station.

The two hydrogen-powered prototypes now unveiled are also light commercial vehicles. The panel van (“Master Van H2-Tech”) is joined by a platform chassis and a minibus – the latter duo is officially called Master Platform Chassis H2-Tech and Master City Bus H2-Tech. The fuel cell technology is the same in all three models, but the capacity of the tanks varies.

The other specifications are as follows: According to the manufacturer, the variant with platform chassis offers “numerous options for customised conversions”, including a box body with 19 cubic metres of cargo volume and a one tonne payload. The bus can carry up to 15 passengers, nine seated and six standing, and is also suitable for wheelchair users. Hyvia cites companies, municipalities and municipal service providers as its target group.

As can be seen again in the press photos, both electricity for the battery and H2 for the fuel cell drive can be supplied externally. On the driver’s side of all three commercial vehicles, a connection for hydrogen refuelling can be seen, and on the opposite passenger side, a charging port for electricity. Hyvia itself describes the drive as “dual-power architecture”, which also allows a pure battery-electric driving mode. The panel van is said to be able to cover 100 kilometres in battery-only mode; Hyvia does not provide any details on this for the two new variants.

Hyvia also does not comment on the battery charging capacity. The H2 refuelling process should be completed in five minutes for all Master H2-Tech vehicles. Last month, Hyvia presented a prototype of a compact H2 filling station that is close to series production. The filling stations will be available for purchase, lease or rental. The hydrogen is either produced on site by water electrolysis or delivered by tank trailers. The system then compresses the H2 in a storage tank and then releases it to vehicles as needed.

With the vehicle variants and the H2 filling station, Hyvia has now unveiled the main players in its “comprehensive ecosystem for carbon-free mobility”. The offering will also include the production, storage and distribution of green hydrogen globally. The joint venture was first announced by Renault and Plug Power in January 2021. Hyvia (“Hy” for hydrogen, “Via” for road) was founded in July 2021 and the French-American joint venture is based near Paris. All propulsion components as well as the hydrogen integration are manufactured in France.

“HYVIA is moving fast. After less than six months of existence, we unveiled three Hydrogen Light Commercial Vehicles: a Van, a Chassis Cab and a City Bus,” sums up Hyvia CEO David Holderbach. “We also revealed our Hydrogen Refueling Station, to offer customer refueling options where hydrogen infrastructure is still in development. HYVIA is about concrete solutions to be on track to meet the challenges of green hydrogen mobility and decarbonization of transport.”