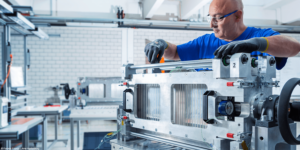 The Chinese battery manufacturer Farasis Energy and the Turkish electric car manufacturer Togg have sealed a 50:50 joint venture called Siro. Siro will develop and produce batteries that will be used in Togg’s entire product range.

While Siro’s headquarters are in Bilisim Vadisi in northwestern Turkey, series production of the batteries will take place in nearby Gemlik. There, a new battery plant is currently being built in parallel to Togg’s production ramp-up, which is scheduled to go into operation in the second half of 2022. In the first step, Siro wants to assemble and manufacture battery modules and packs there, with the battery cells required for this being supplied by Farasis Energy in Turkey. In a further step, it is planned to also manufacture the battery cells in Gemlik, Turkey. This is according to a press release issued by Farasis Energy Europe.

Farasis Energy and Togg had already signed a memorandum of understanding in October 2020 to work out the details of a strategic cooperation. Since then, it has become clear that Togg will rely on cells from Farasis Energy and that the Chinese will also act as Togg’s partner for the assembly of the batteries. Initially it was said that the cells would be delivered to Turkey from Farasis’ planned factory in Bitterfeld (Saxony-Anhalt). Recently, however, doubts arose about the Chinese timetable for the plant. According to media reports, the operation in Bitterfeld-Wolfen could possibly only start in 2024 – like Farasis’ customer Daimler, Togg is to be supplied with cells from the Chinese Farasis plants until then.

In August, Togg had announced its plans to start series production of the country’s first electric car. According to company boss Gürcan Karakas, the debut model – an SUV with a range of up to 500 kilometres – is to go into series production in the fourth quarter of 2022 and roll out to dealers in two design variants – one for “western” and one for “oriental tastes”.

Simultaneously to the battery plant mentioned above, Togg is building a vehicle plant with a capacity of 175,000 units per year. Five models are to be realised on the company’s electric platform by the end of the decade. The SUV is to be followed by a sedan and an estate car, and later by a larger SUV and a van. The Togg headquarters will later also move to the port city near Bursa.

Meanwhile, the newly founded joint venture will produce energy storage solutions not only for Togg, but also for other manufacturers in the automotive or other sectors. Also under the Siro flag, there are plans to open a research and development centre in Bilisim Vadisi to develop lithium-ion NMC batteries based on Farasis technologies.

“The joint venture between Farasis Energy and TOGG marks the dawn of a new era in the electrification of Turkey,” expresses Dr Yu Wang, co-founder and CEO of Farasis Energy. “We are proud to be part of this initiative and e-mobility offensive that we are driving and shaping together. For Farasis Energy, the establishment of the joint venture is another important milestone in the development and expansion of an international and European strategic network.”

Togg CEO Gürcan Karakas emphasises his company’s goal to become a “global use-case mobility provider”. “We will provide user-centric, smart, empathic, connected, autonomous, shared and electrified mobility devices and build a mobility ecosystem around them. Battery technology is a critical part of what we want to achieve. And our goal with Siro is not only to produce batteries for electric vehicles in Turkey, but also to develop battery research and development capabilities in our country.”