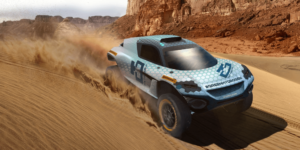 The battery-electric off-road racing series Extreme E has announced plans for a spin-off with hydrogen vehicles at the start of its second season. The Extreme H off-road series is scheduled to start in 2024. Incidentally, last year’s champion Rosberg-X-Racing won the season opener in 2022.

The Extreme H cars will use the same drivetrain and chassis as those of the Extreme E, but will use a hydrogen fuel cell as the main energy source instead of a battery. Visually, therefore, the Odyssey 21 unit cars will be indistinguishable from each other. The power of the BEV version is 400 kW.

How exactly the fuel cell drive system will be constructed and designed is not clear from the current announcement. Apparently, the project is still at an early stage, both technically and organisationally. According to Extreme E, the development of the Extreme H vehicle is already underway. A prototype is to be presented and tested in early 2023.

Extreme E founder Alejandro Agag calls the creation of a hydrogen racing series “a natural progression of our mission” to show the possibilities of new technologies “in the fight against climate problems”. “Sport is the fastest and most effective platform to drive innovation,” says the Spaniard.

In the coming months, the organisers want to discuss and decide together with the participating race teams how the hydrogen race cars should be integrated into the series. “Two separate categories, complete transition to hydrogen or joint races are options on the table,” says Agag.

The Extreme E is basically familiar with hydrogen: the BEV race cars are charged at charging stations from AFC Energy, which draw their energy from a fuel cell. As the races take place in very remote locations without grid connection, the fuel cell-based and off-grid charging station with H2 produced from solar and hydro energy should enable the race series to operate as sustainably and with as little CO2 as possible.

The announcement of the Extreme H was made during the first race of the second season of the Extreme E. The season opener was won by the Rosberg-X-Racing team, the champion of the first season. This season, the Rosberg car will still be driven by Johan Kristoffersson, his teammate is now the Swedish driver Mikaela Ahlin-Kottulinsky, who in the pre-season still competed for the JBXE team of Formula 1 World Champion Jenson Button.

However, the final race in Saudi Arabia at the Desert X-Prix had to be interrupted by a red flag: Tanner Foust of the new Team McLaren XE collided with RXR’s race car and rolled over. After the restart, Kristoffersson in RXR was able to overtake the race car from the Sainz XE team in the penultimate corner. Third place went to X44, Lewis Hamilton’s team.

BYD releases the 800-volt Yuan Plus in China