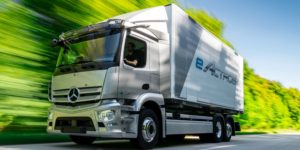 The co-founder of the charging infrastructure provider Allego, Anja van Niersen, is to take over the leadership of the announced joint venture between Daimler Trucks, Traton and Volvo. So far, the approval of the cartel authorities for the venture is still missing, which is why the top personnel has not yet been finally decided.

Van Niersen was CEO of Allego from 2016 to 2019, as also shown on her LinkedIn profile. In December 2019, Mathieu Bonnet was appointed as the new CEO and the manager took over as chairman of Allego’s supervisory board. The planned personnel for the joint venture of the three vehicle manufacturers is reported by Manager Magazin.

Daimler Truck, the Traton Group and the Volvo Group signed a binding agreement in December 2021 to establish their joint venture, which was announced earlier in July. The aim is to build and operate a public charging network of 1,700 high-performance charging points for battery-electric heavy-duty long-haul trucks and coaches in Europe.

The joint venture, based in Amsterdam, will be owned equally by the three parties. It is planned to start operations this year.

But the regulatory approval process seems to be dragging on. Daimler truck boss Martin Daum recently criticised this: “This should have happened three months ago. We should already be operational,” Daum told the Financial Times. “We are ready to invest the money, we have someone ready to take over the chief executive role and she can’t do it because we don’t have the approval.”