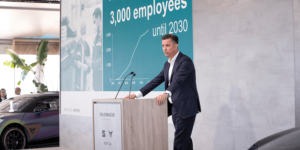 The Volkswagen Group and Seat are increasing their investment in e-mobility in Spain from the initially planned seven billion to ten billion euros. VW wants to invest the money not only in its own plants, but also in building up a supply chain.

Volkswagen had mentioned the sum of seven billion euros in March when the group announced the construction of a battery factory in Sagunt near Valencia. The increase to ten billion euros comes at an apparently strategically chosen time.

Shortly before, VW, Seat and dozens of other partners had announced their application for the programme “Strategic Project for Economic Recovery and Transformation” (abbreviation in Spanish: PERTE), with the aim of making Spain a hub for electric vehicles in Europe. With the increase of another three billion euros, VW makes it clear that they mean business. In the announcement of the application, however, Seat also stressed that the investment depends on the positive funding decision.

According to group boss Herbert Diess, the investment of 10 billion euros will go towards the battery factory in Sagunt near Valencia, the production of electric vehicles in the Martorell and Pamplona plants and the development of a comprehensive supplier ecosystem. Construction of the battery factory with an annual production capacity of 40 gigawatt-hours is scheduled to begin in the first quarter of 2023, according to the current announcement. Production is scheduled to start in 2026.

At the event on the site where the battery factory is to be built, Diess was joined by Spanish Prime Minister Pedro Sanchez. The PERTE funding is to be awarded this year.

VW also announced an expansion of its partnership with the Spanish energy supplier Iberdrola. In future, they will not only cooperate in the expansion of the charging networks: Iberdrola will invest around 500 million euros to build a large solar park near the Sagunt battery plant, which will partially supply the plant with electricity.