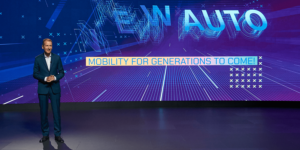 Volkswagen has presented its strategy for 2030 called ‘New Auto’. At the core of this strategy is the shift to electromobility and the gradual phasing out of the combustion engine – but it goes far beyond electrifying the hardware that has been dominant for so long

It has already been very clear for a while now that Volkswagen’s future is electric. At the latest with the launch of the MEB platform and the ‘Power Day’ in March, it was clear where CEO Herbert Diess was steering the Wolfsburg-based group. VW, which will soon be one of the largest battery users worldwide, defined its own cell format – the unit cell.

Today, at the presentation of the New Auto strategy for 2030, Diess and his top management gave insights into how this change of the group is to take place. The term “reinvention” surfaced with some frequency. The Volkswagen strategy is called New Auto because, as Diess insists “the automobile will remain,” and: “Individual transport will remain the most important means of transport until 2030.”

While many industry experts – including Diess himself in the meantime – predicted that the entry into individual mobility would become more expensive, the VW boss has changed his stance in light of the emerging trend. “The price of mobility is falling below today’s level,” Diess said at the strategy presentation. “At the same time, industry sales will double.”

How is that going to happen? With software, batteries and digital services. The battery cell production announced at Power Day should help increase the group’s value creation in electric mobility. At the strategy presentation, VW gave an update on the six European battery Gigafactories, which are to produce the unit battery cells for its own use. Gigafactory 1 is operated by partner Northvolt in Skellefteå, Sweden.

While it was already announced at the Power Day that Northvolt is no longer involved in Factory 2 in Salzgitter in Germany, contrary to the announcement made in March, VW will not operate this plant alone. For Salzgitter, the Wolfsburg company has brought the Chinese partner Gotion High-Tech on board this week. From 2025 onwards, unit cells for the volume segment – i.e. cathodes with a high manganese content – are to be built in Germany at the Salzgitter plant. Northvolt will build premium cells in Sweden, with cathodes that have a high nickel content.

As for the third factory, previously planned for southern Europe, the latest information is that it will definitely be built in Spain. VW and its Spanish subsidiary Seat already made a strong case for this, as larger volumes of electric cars are also to be built at the Seat plant in Martorell in Spain. Here, however, the Group wants shares in the announced Spanish PERTE funding. Officially, Volkswagen is said to be examining the option of building a gigafactory together with a strategic partner. The production of the so-called Small BEV Family in Spain also still depends “on the general framework conditions and government subsidies”.

Point 2 for industry change is software, according to VW. “In a world of the New Auto, brand differentiation will come much more from software and services,” says Diess. But this also means that the costs and complexity of the hardware should decrease in the medium and long term.

In the short term, however, it will probably be a bit more expensive, because at the strategy day VW also announced the de facto end of the two electric platforms MEB and PPE – even before the first PPE model, the electric Porsche Macan, is even launched on the market. VW is developing a single Group platform, the Scalable Systems Platform or SSP for short. The first vehicle is to be based on the SSP in 2026, and from then on “all important future models” are to be based on this platform – from 85 to 850 kW output for all models and brands, as Diess puts it. Like the MEB in the cooperation with Ford, the SSP is to be opened up to other carmakers. The company did not say how long VW intends to continue operating the MEB and PPE in transition.

SSP: One platform for all VW electric cars from small cars to premium SUVs

VW gave only a few key data on the SSP. As Audi boss Markus Duesmann, who also heads Group Research, indicated, an “800 Volt Flex” system is to become standard for the mechatronic platform. And already by 2030, the SSP is expected to reach more volume than MEB and PPE combined – 40 million vehicles are to be built over the platform’s unspecified lifetime. “This shows that the economies of scale we expect will be enormous,” says Duesmann.

This is to be made possible by a modular concept. ” We need a drastic reduction of variants,” says Duesmann. “That’s why SSP consists of standardised modules that can be combined within certain specifications.” As an example, the Audi boss cites the number of battery systems, which could also be reduced to eight systems across the group – from 22 systems today.

The combination of modules and predefined platform sizes should reduce complexity by 50 per cent. Nevertheless, special vehicles should be possible – within the limits for the combination of modules indicated by Duesmann, so as not to increase complexity and costs again. An entry-level model from Porsche could become a sports model from VW – and yet the vehicles would still be able to be differentiated. “We will no longer have to cover this complexity in development work, but we can still offer diversity in front of the customer,” says Duesmann. The development work is to take place primarily in Wolfsburg, where Volkswagen is investing 800 million euros in a new development centre.

From 2025 onwards, combustion margins will be under pressure

Complexity is also the keyword for the combustion models. Group boss Diess expects the market for combustion engines to shrink by 20 to 30 per cent in the near future. Chief Financial Officer Arno Antlitz justified this with the reasoning that “We want to keep the internal combustion vehicles competitive and generate stable cash flows,” Antlitz said.

His scenario is that, from 2025 onwards, the margins of combustion engines will come under pressure, as electric cars will already catch up with combustion engines in terms of profit margins in two to three years. In order to cushion the falling combustion margins, complexity will be gradually reduced – fewer engine-transmission combinations, fewer models. In Europe, this means 60 per cent fewer models by 2030, as Antlitz explains. In parallel, more and more plants are being converted to the production of electric cars. “The MQB for the combustion engines will be a big advantage here, because we can keep economies of scale high with the MQB.”

Over the next few years – probably partly because of the development of the SSP and software – the share of expenditure on research and development will increase, says Antlitz. After that, the share should decrease again. However, this expenditure should quickly lead to the corresponding turnover. His forecast for 2025 shows a lot of confidence: as a basis for the planning round 70 next November, the group has increased the original range for the operating return on sales from 7-8 per cent to now 8-9 per cent.

“We expect that by 2030 sales of electric cars will exceed those of combustion cars,” the CFO said. “From 2025, another ‘revenue pool’ will be added software. By 2030, the software will be similar in size to the revenue share of electric cars or internal combustion cars.” With revenues of 1.2 trillion euros, software could account for around a third of the total mobility market by 2030, in addition to the expected BEV and ICE business, Volkswagen estimates.

Dirk Hilgenberg is supposed to make this possible. The CEO of the group’s own software forge Cariad is to tap into this “revenue pool” with his team. “We are at the forefront of the transformation,” says Hilgenberg. “We’re creating the foundation for data-driven mobility and access to these profit pools for the group.”

From E3 1.1, the software of the MEB, the PPE will see an evolutionary change to E3 1.2. “It’s going to be a whole new driver experience,” says Hilgenberg. Customers of Audi or Porsche will be able to bring their own data and services into the car. As a slide from Hilgenberg’s presentation shows, the E3 1.2 will be based on Android Automotive – i.e. like the system in the Polestar 2.

But Hilgenberg also announced the revolutionary development for 2025. That is when the E3 2.0 is to debut, in the vehicle of the Artemis project. “E3 2.0 offers maximum development synergies in countering, but gives brands the opportunity to differentiate,” says Hilgenberg. E3 2.0 also supports Level 3 autonomous driving and is ready for Level 4, according to Volkswagen.

Hilgenberg’s forecast: “The software will completely change the product life cycle. Downstream of the sale, we will be able to further upgrade the customer experience – permanently or temporarily, depending on whether the customer wants that.” His example: the customer can unlock more range afterwards, for a holiday trip possibly only for a few days, or even permanently if the owner’s life circumstances have changed. All of this is supposed to generate sales after the vehicle has been purchased – and thus increase the margin per vehicle “significantly”. Hilgenberg, however, did not give any details.

In addition to the E3 software in the vehicle, which already offers revenue opportunities, a software platform around mobility services is also to be built. Mobility-as-a-Service and, in the commercial sector, Transport-as-a-Service should be as easy to offer and use as an app – this is also made possible by the Level 4 capability of the E3 2.0. Together with the services from the vehicle software, this results in point 3: digital services.

In order to sell the 40 million BEVs with E3 2.0 software that Hilgenberg is aiming for by 2030, the company must tackle another challenge: charging the electric cars. To this end, Volkswagen intends to further expand the public charging infrastructure in Asia, Europe and America – in some cases beyond the targets announced at ‘Power Day’.

Electrify America is to almost double its current charging infrastructure in the USA and Canada to a total of 1,800 fast-charging stations and 10,000 installed charging points by 2025, as VW manager Elke Temme announced. The planned expansion will lead to the expanded use of 150- and 350-kilowatt charging points.

In Europe, Volkswagen has also agreed to a new joint venture with Enel X to build a nationwide HPC network in Italy with more than 3,000 charging points of up to 350 kilowatts each. In total, the Volkswagen Group plans to build 18,000 HPC charging points in Europe, 17,000 in China and 10,000 in the USA and Canada.

“The automobile, individual mobility has a bright future,” Diess says with conviction. “With its innovative brands and state-of-the-art technology platforms, Volkswagen is preparing to play a leading role in the new mobility world.”