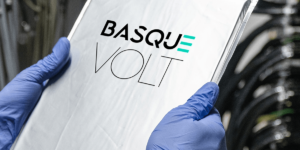 The plan is to develop prototype cells and commission a pilot production line in 2025 with investments of 700 million euros. An annual production volume of 10 GWh is then to be achieved in 2027.

The location for the first phase of Basquevolt activities will be the Álava Technology Park in Spain. This Basque research centre will provide Basquevolt with technological support rooted in over ten years of research in the field of solid-state batteries. The research centre has a team of researchers led by Michel Armand. A French professor of chemistry, Michel Armand is also a physicist, materials scientist and electrochemist. He has been working at CIC energiGUNE in Spain since 2011. At the end of the 1970s, he came up with the basics of a rechargeable battery in which lithium ions move back and forth between two solid bodies, making him “the intellectual father of modern batteries”. It is therefore hardly surprising that Basquevolt’s technology is based on the use of a composite electrolyte patented by CIC energiGUNE.

Generally, Iberdrola is more focused on the field of charging infrastructure, and has made several high profile partnerships in the recent past to gain the upper hand on the Spanish charging market while vastly expanding its charging infrastructure. Partners include Volkswagen, Volvo, as well as more local players, such as the electric bus manufacturer Irizar, who also wants to see growth in the Spanish charging infrastructure. Last year, there was also talk of building a battery plant in partnership with Volkswagen subsidiary Seat near Barcelona. Seat had already constructed a battery testing lab at the Martorell location near Barcelona in 2020.